The words surprised Katie Williams when they came out of her mouth. They probably surprised the other New Zealanders at the meeting even more. When their seniors group, the University of the Third Age, asked for activity suggestions, they were probably expecting something closer to symphonies than cemeteries.

But after the meeting, a line of people waited to talk to her – and a movement that would spread around the world was born.

Some were seeking a sense of community, others to get over their fear of death, or to simply save money over a traditional funeral. A number of elderly woodworkers came forward to volunteer their skills, and soon enough, the first “coffin club” was born.

Members of the new club began designing coffins that reflected their diverse passions and life stories. There was an Elvis-themed coffin…

And one dedicated to a woman’s pet chickens:

And when the husband of one of the members died unexpectedly, the club printed out pictures of his favorite band, the Beatles, before the service and placed them on his casket.

“The end facing the family and the other people at the service was the Yellow Submarine,” Katie explained. “Halfway through the service somebody got up and started singing ‘Yellow Submarine.’ Everybody got up and danced in the aisle, and they had a wonderful time. When it was finished, they sat down again and we got on with the funeral. But that would never have happened if he’d had a mahogany and gold one.”

While their club was running along in their beautiful corner of the world, something else unexpected happened: people noticed. The Kiwi club started attracting local and then international attention, ultimately becoming the subject of a movie, the Coffin Club. After a musical preview for it went viral, more media followed, including Freethink’s own documentary:

They began getting calls from around the world from people interested in starting their own clubs. Two of them were Kate and Kate, two celebrants in the UK.

“I’m the blonde one, and she’s the one who’s hair color keeps changing.”

After years of organizing weddings, they transitioned to funeral arrangements, but they felt frustrated by the “20 minutes at the crematorium” type of services. “Didn’t feel it did justice to people’s wonderful lives,” they explained. “We looked at each other and thought, ‘Is this what we would want for our loved ones?’”

“You Never Get a Second Chance at That”

When their more creative ideas kept getting shot down by local funeral directors, the Kates decided to get in touch with Katie. With her advice, they launched the first Coffin Club in the UK.

They decided to create their own format, something Williams encourages. “It’s got to come from their hearts and their heads. I’m not the big boss of it all.”

Rather than meeting once a week automatically, Kate and Kate decided to teach a course. It’d be a series of sessions, each with a speaker, and for simplicity’s sake, they would pre-order their coffins – a self-assembled model built with an Allen wrench, like IKEA furniture.

But the UK club wasn’t just about decorating coffins: they also helped people find creative ideas for burial. When one man mentioned he’d love to be buried on his own land, but assumed it was illegal, they did the research and discovered that it was actually allowed. They arranged for a procession from the village hall to his backyard, carrying his coffin to the beat of drums.

Some people weren’t interested in coffins at all but came for the community and the speakers – “forward-thinking” funeral directors, people who did natural burials, and other creatives – who let them know about different possibilities for their funerals.

“Our goal is to let people know what their options are. If you go through it and you still want the man with the top hat and the crem, that is totally fine. We just want you to know that isn’t your only option… because you never get a second chance at that.”

How to DIY a Coffin Club

Katie’s first piece of advice is “just put your big toe in and see what happens. And then the rest of your foot.” There’s no one right way to do it, and it’s worth just diving in.

She has also, helpfully, contributed to a guide on setting up a coffin club with the makers of the first Coffin Club documentary. It’s full of practical tips, from seeking funding to downloading design templates for the coffins themselves.

One key part of running the club is finding members – especially new members, since (after all) most will only be around so long.

Katie Williams often gives talks to local groups, but she finds that the members themselves are walking advertisements, getting friends and acquaintances interested in taking part.

Kate and Kate have been filling their course by talking about it wherever they go – in the sauna, or at the gym. “Sometimes we go in the street to try and recruit them, and they think you’re mental, like you’re in a cult or something,” says Kate D.

People have various reasons for joining, from saving money to having fun, but one that stands out is closure. Kate and Kate mention a woman who re-burned the ashes of her dead husband, while Katie Williams used her medical background to try to help track down records of a stillborn child one couple had grieved over for years.

The community aspect is also very important for the members.

“Many of our oldies lack a human touch. Many of them have lost their partners. They have no family or their family are way away,” explains Katie. “It’s extremely important for health and wellbeing to be touched and loved by somebody. So our darlings come to the club and they’re greeted extremely lovingly… We have little pecks on the cheeks and things. It mightn’t seem like much at all, but it’s paramount, and I sometimes think it’s probably the most important part of our Kiwi Coffin Club happenings – the socialization and the amount of love that goes round.”

The Kates have had a similar experience. Getting people to commit to show up six weeks in a row is a challenge, but when they do, “Within five minutes, they’re sharing stories and ideas, and they’re bonding.”

A more prosaic piece of advice is to be conscious of logistics. When Kate and Kate began their club, it was a headache finding someplace with the ability and desire to store six coffins. They had to trudge across the city looking at venues, some of which had “heaps of stairs.”

Given that, when possible, it’s good to start it with a partner. “It’s a lot of time and effort, and there’s no financial reward because we have set it up as a charity… It’s really good there’s two of us because it is a lot of responsibility.”

Of course, you’re also welcome to hear it straight from the horse’s mouth. On the Kiwi Coffin Club website, you can get in touch with Katie directly for advice or perspective.

Entrepreneurs
Digital nomad: why work from home if you can work from anywhere in the world?
Digital nomad visas make it easier than ever for remote workers to live in foreign countries for extended periods of time.
By Tim Brinkhof
Up Next 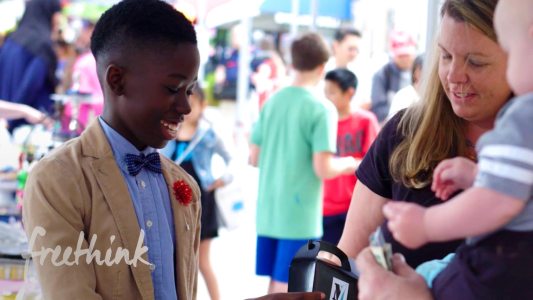 At this business fair, kids are the entrepreneurs…

Entrepreneurs
The business fair for children
1:07
Subscribe to Freethink for more great stories
Subscription Center
Sections
Video
Freethink
Subscribe
We focus on solutions: the smartest people, the biggest ideas, and the most ground breaking technology shaping our future.
Subscribe