My dad bought me my first drone at Maker Faire when I was 12 years old. It was a small drone, for a small child, with her even smaller brother frustratingly trying to paw at her new toy.

But it felt giant. Everything did. It felt like all of my education in school somehow culminated into something I could play with, break and make better.

Dale Dougherty and his Maker team championed this playful creativity for nearly 15 years. In 2005, Doughtery launched MAKE Magazinewhich focused on DIY projects involving computers, electronics, metalworking, robotics and more. The magazine was started as a way to share ideas but Doughtery soon realized that these makers needed to meet in person, too. A year later in 2006, the first Maker Faire was launched at the San Mateo Fairgrounds. The fair became a regular event where creators could meet in person, share their ideas, and evolve as makers. Through these ventures, Doughtery and his team became the heartbeat of the DIY community that has come to be known as the “Maker Movement”.

My colleague and I had the opportunity to attend Maker Faire’s 2019 Bay Area event this past May. I was deeply grateful that we were able to cover the humans that define the maker space — not knowing that only a few weeks later, Maker Media would be laying off their entire staff and pausing all operations, including MAKE magazine and any publications under the Maker Media brand.

The maker community will certainly feel the loss of Maker Media which became a central hub for learning and sharing ways to create and innovate. TechCrunch has more in-depth coverage of their future plans, noting that Doughtery is working to keep the magazine’s archives online and to license the name to future events.

Below are some of the fantastical creators who shared their maker minds with us at the last Maker Faire.

These interviews have been edited and condensed for clarity.

Why is Maker Faire important to you?

Innovation comes from creative people having ideas and sharing them and building stuff. That’s the kind of world we want to live in—where people can contribute something beautiful, interesting and useful. I wanted Maker Faire to be a place and a community that encourages people to do that.

It’s also important because of the kids. Kids came. And I thought, wow, they get it. You know, we’re talking about play and creativity and learning. They’re just like, yeah, give us more of that. And I realized that they don’t get that in school. They don’t get it at home. Part of the mission really became ‘how do we solve for that lack of exposure?’ Every year there are more kids that need this.

I don’t know why it’s so hard for people to understand that. When I say this is about people being creative and playful, some people trivialize that. This is what Silicon Valley once was, but they’re losing that. Now it’s about the cash culture and how much money you make. I think the parts of the world that embrace the maker culture will be the ones that are successful in the future. We have about 200 Maker Faires in 44 countries. So this isn’t an American idea or one culture or one language. It’s really something that’s gone into lots of different places.

Jonathan Tippett, creator of Prosthesis, the flagship machine in a new sport called mech racing where pilots compete against each other with massive, manually controlled exoskeletons. Prosthesis is 15 feet tall and weighs over 8,000 pounds. It’s controlled entirely by the human sitting inside its small cockpit. It can run up to 20 mph (lasting up to an hour on a battery charge) and can step over obstacles.

It feels like a gorilla bounding. It’s kind of like my mountain biking experience. Barrelling over rocks, part of it is your body controlling the bike and part of it is the bike’s suspension sucking up the bumps. Motorcycling is the same thing— it’s this human and machine interaction.

You have to be physically adept for this sport. You have to be interested in putting in the time to master a physical skill and attain that flow state. Like gymnasts, people who do parkour, BMXers, motocross riders, snowmobilers, windsurfers, kite boarders— you know, slightly-perilous-sports kind of people.

No one else can pilot this. It’s tricky, because the training is pretty hard on the machine.

But that’s an important part of the process because if we’re going to start offering this up for other people to learn on, we need to (a) develop pedagogy and (b) get the machine ready for these people to go in and crash on.

Bruce Tomb, Maker of Maria Del Camino, an electric vehicle that is mounted to a highly modified hydraulic excavator that may be operated manually or remotely via smartphone.

What was your inspiration for Maria?

I’ve always loved the ’59 El Camino — it’s my very first memory. Sitting under the Christmas tree opening a Christmas present which was a ’59 Impala (toy) — a relative of the El Camino you see here but it has the cat eye tail lights.

This project is an exercise in domesticating the machine. If you think about the first model T, it was very much like something you might see at a fair. But it was not a product, really. Henry Ford did a lot to make it mass produced but he had to crank ’em to start them and it makes all this noise. Most people that drove them knew how to work with them already or learned how to fix them. So the ark of the automobile has been domestication: the automobile now is more like your desktop computer or kitchen appliance. I’m interested in embodying that history of the automobile and technology with this machine so I evolve the machine each year. I add some new functionality. The latest was bringing it from diesel to electric.

Suzanne Garnier, Mistress of Molten Metal at the Flaming Lotus Girls, a group of artists who make large-scale kinetic fire art. Many of the sculptures are interactive and allow the audience to control the lighting, flames, sound, or other effects.

How did you become a fire artist?

I had been going to Burning Man and one time a friend said, “You know, Susanne, there’s a group of women you need to meet.” And on the first day with the group, I bent stainless steel with my bare hands, well, with a hammer and clamp. I never—I’m a retired nurse. I never did anything with power tools. It was very empowering.

The group is called the Flaming Lotus Girls. We’re an all-volunteer art collective, started by two women in the early 90’s. We built first for Burning Man but then we took our things, our sculptures around the world. We’re even in the Smithsonian!

The purpose is all about art on fire. Everyone puts ideas in and builds along the way. This is my tenth year! This year we’ve got a new piece called Serenity.  The mythology behind it is there was a jar of fireflies and it got bigger and bigger and bigger until it reached eight feet tall and eight feet wide and it burst open and broke into three pieces. So on top of each jar is a firefly that shoots fire from the antennae and the butts!

Eric Relson, Mech Warfare, a competition composed of small, remotely piloted walking robots armed with airsoft guns. These robots are placed in a small-scale model urban environment to duke it out.

What qualities make for the best Mech Warfare competitor?

The type of person who loves mech warfare likes doing all sorts of combination mechanical, electrical, and software stuff. And spends a lot of their free time on it. They’ve got to be a bit creative and they’ve got to have that perseverance because not everything works on the first try. That’s the spirit of it.

There’s a lot of knowledge to gain. And we have example designs that people can start from. But even with that, it’s still a lot of work. But it’s always fun at the end of it. I have three nephews so I let them drive the robot. They get a real kick out of that! 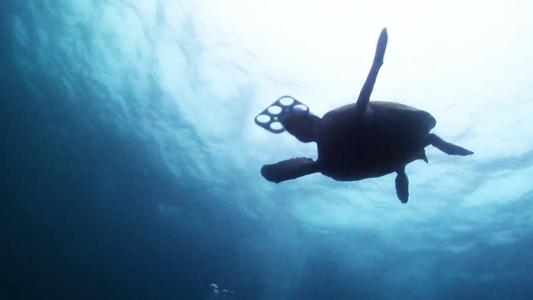 18 billion pounds of plastic are dumped in the ocean every year. This microbrewery created biodegradable six pack rings to help stem the tide.