John Legend and Tinashe are the latest artists to start experimenting with virtual concerts while we’re all homebound thanks to… well, you know.

The two artists will be a part of “One Wave,” a new series of virtual concerts that kicked off April 30 and will continue all summer long. The streaming company behind the series is Wave, an Austin-based startup that aims to transform the live music experience for fans.

If successful, it could help usher in a form of musical entertainment that lets fans see and support their favorite artists in an entirely new way.

The idea of live streaming a musical performance isn’t exactly groundbreaking. Artists have been doing it since the 1990s, and even massive festivals like Coachella now let fans watch an entire weekend’s worth of sets from the comfort of their own homes.

Since 2016, though, Wave — a platform that is a combination of virtual reality, video game, and live streaming — has aimed to offer fans something different.

Instead of simply broadcasting whatever cameras and microphones can pick up during a performance, Wave streams virtual concerts that place artists into fantastical worlds — and then gives fans a way to join them there.

During Wave concerts, artists perform live while motion capture technology records their movements. A digital avatar of the artist then replicates the performance within a virtual environment for viewers to enjoy.

Fans have a number of options for streaming the virtual concerts, including several social media  and gaming platforms. Those with virtual reality systems can fully immerse themselves in the artists’ worlds using the Wave app.

Attendees can join the audience as digital avatars and interact with other fans via chats. They can even influence the show, by voting on scene changes, for example.

“The fan engagement is what makes the Wave experience so exciting,” Wave CEO Adam Arrigo told Music Tech in November. “Fans become active participants in the concert experience, chatting directly with the artist and each other, cheering, and sharing reactions. This two-way dialogue and intimate interaction is what Wave is all about.”

“One Wave” kicked off with a performance by EDM duo Galantis last week. There’s no official word on when the next show will happen, but so far, the list of confirmed artists includes the aforementioned John Legend and Tinashe, as well as Jauz and Lindsey Stirling.

According to the “One Wave” announcement, the company has already solidified partnerships for future virtual concerts with the music labels Warner Music Group and Roc Nation.

It’s also in talks with several other labels, management companies, and independent artists — and based on the popularity of rapper Travis Scott’s recent virtual concert, it’s not hard to imagine others in the music industry taking a chance on this new performance medium.

Five times over the course of three days, players could log into the event and watch as a gigantic avatar of Scott teleported around an ever-changing animated world while performing several hit songs, plus a never-before-heard track.

The set lasted just 10 minutes. While the rapper didn’t control his avatar by performing live, like artists do in Wave performances, the show confirmed that music fans are willing to give virtual concerts a chance. At one point, more than 12.3 million people were tuned in to watch Scott’s performance — far more than could ever fit into a traditional concert venue.

In addition to offering fans a new way to enjoy their favorite artists, virtual concerts also offer artists a novel way to make money at a time when many are desperate for new monetization routes.

Wave’s performers, for example, can earn cash through the platform’s virtual merchandise stores and “tips” feature.

Bigger draws like Scott, meanwhile, could get sponsors for their virtual concerts or use the shows as marketing tools. For example, a Rolling Stone recap of the “Fortnite” event noted that “even in the confines of a video game, giant Travis was a detailed capitalist, making sure to wear an assortment of his coveted Jordan collaborations that currently fetch $500 to $1,000 on the resale market.”

Right now, though, virtual concerts are something of a novelty, and some of those who tuned in to Scott’s performance likely did so just to see what the medium was all about.

However, if other artists can follow in the rapper’s giant footsteps, drawing millions of people to their events after that novelty wears off, virtual concerts have the potential to shake up the music industry — for both artists and their fans. 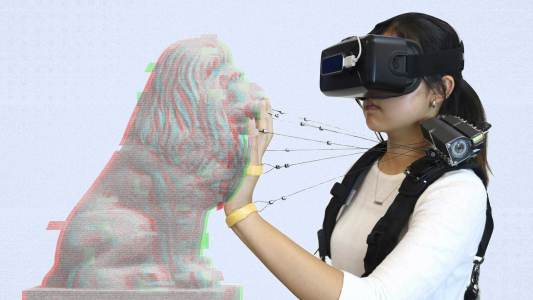 Wireality is a new device that provides haptic feedback for someone using a VR system by pulling on their fingers and wrist with a series of strings.