When the coronavirus pandemic set in, few arenas were hit more dramatically than live events. Organizers across a constellation of industries in the “live economy” scrambled to provide compelling virtual offerings in lieu of physical gatherings, to varying degrees of success.

More than a year into the pandemic, virtual events have now become second nature for many, but as vaccination numbers rise worldwide—with more than one in five people in the U.S. now fully vaccinated—the prospect of large IRL events is once again on the horizon.

And, according to a new report out today from the National Research Group, nine out of ten consumers are eager to return to these real-world events.

The study, titled “The Future of Live: Searching for Connection in a Post-Vaccine World,” also points to a trend that might not be as self-evident: we’re still pretty excited about virtual events.

With a full seven in ten consumers planning to continue attending virtual events in a post-pandemic scenario, it’s clear that our expectations around “live” offerings have evolved — and these shifts have important implications for the future of events and synchronous gatherings.

How the Pandemic Changed Our Relationship to the Virtual

At the onset of the pandemic, the shift to virtual events was a product of necessity. Quick fixes were implemented to keep things running until lockdown measures ended. But weeks stretched into months, and stopgaps turned into more comprehensive changes.

While many still yearned to attend in-person events, the collective investment in virtual options led to new understanding of what could be achieved in digital spaces.

“What began during the pandemic as forced substitution now reflects a major evolution and democratization of the live events category,” said National Research Group CEO Jon Penn in a statement.

Virtual events certainly offer the convenience of attending from home, but according to the study, what’s driving this “major evolution” has more to do with the unique possibilities they offer. By inviting new forms of connection, co-creation, and community, virtual events transcend simply substituting for IRL and in fact create opportunities that aren’t possible any other way.

The Changing Nature of “Being There”

Experiencing a live event is all about that feeling of “being there,” but in virtual spaces, “there” isn’t so much the physical location as it is the people there with you.

The Teleparty Chrome extension, for example, allows for co-viewing on any major streaming service. The platform, launched in March 2020, now hosts over 10M users — and according to the report, more than 70% of respondents said they were excited to try this type of synchronous viewing with family, friends, and other fans in the future.

Experiencing a live event is all about that feeling of “being there,” but in virtual spaces, “there” isn’t so much the physical location as it is the people there with you.

Many in the post-vaccine world will opt to hit the movie theatre for new releases or movie nights at friends’ houses, but as a result of the pandemic, Teleparty now exists for those separated by distance, or who simply don’t want to leave home to connect.

Virtual events also offer new modes of co-creation with creators, performers, and speakers, and more than 70% were excited about these two-way dialogues. It is here that real-time social audio apps, such as Clubhouse, Discord, and the recently launched Twitter Spaces, stand to offer value in the post-vaccine world.

Other interactive livestream platforms, such as Twitch and Hovercast, also allow creators to establish meaningful connections with fans — and to drive revenue through tipping and merchandise sales.

Rather than framing the discussion in zero-sum terms (virtual vs. physical), creators can now decide which option along a spectrum of possibility fits their particular needs in a given moment.

Even prior to the pandemic, young people were connecting and creating meaning in virtual spaces, as evidenced by the breakaway success of Fortnite. For them, the game serves as much as a social space as it does a battle royale game — something that became abundantly clear to the rest of the world when Travis Scott shattered concert records with his performance on the platform in April 2020, which saw 45.8M views across its five airings.

Being able to share in this event alongside other players added to its “liveness” — and, more importantly, allowed audiences to connect to the artist in a new, uniquely virtual way. 70% of all consumers (and nearly 80% of Gen Z respondents) in the study expressed “strong excitement for use cases that bring them closer to their favorite creators.”

We believe discovering and enjoying music in the metaverse together with friends is a unique experience that can bring millions of people together for the first time around artists they love.

Throughout 2020, other virtual concert experiences — such as The Weeknd’s TikTok performance through WAVE and Lil Nas X’s performance in Roblox — solidified virtual concerts as a viable means of capturing attention and activating global audiences.

And while virtual concerts might have been the only available option under the constraints of the pandemic, Roblox Global Head of Music Jon Vlassopulos believes they will continue to assert themselves as viable counterparts to physical shows in the years to come, creating novel hybrid experiences that connect fans around the world.

“We believe discovering and enjoying music in the metaverse together with friends is a unique experience that can bring millions of people together for the first time around artists they love,” Vlassopulos said in the report. “Virtual concerts, on platforms like Roblox, will complement live shows, unlocking new global audiences and giving fans experiences that can’t be replicated in the physical world.”

The Role of Emerging Technologies

The increasing fluidity of online spaces is changing expectations of events held in physical spaces. Emerging technologies played a vital role in the landscape of live events during the pandemic, and these developments will extend into the post-vaccine world. Four in five consumers want the in-person events they attend to include “exciting technology capabilities,” with 50 percent of them willing to pay for these unique integrations.

The recent $1.25B valuation of Rec Room, VR’s first “unicorn,” also signals faith among investors that the future of socialization will be heavily virtual and cross-device (from smartphone to VR headset).

“The future of events is a hybrid model,” said Leila Amirsadeghi, Senior Program Manager, Microsoft Mixed Reality, in the study. “I see the virtual events market expanding as our ability to emulate presence evolves, providing new forms of social engagement and interaction. It is not about replacing live events with virtual, but rather augmenting and extending the experience into the digital sphere—a more accessible space for artists and audiences everywhere.”

At the onset of the pandemic, the goal for live events was to replicate aspects of in-person gatherings in a virtual context. The data in this report suggests that the inverse is taking place — that as we make our way back to in-person events, we’ll find they’ve become much more virtual.

For more on this, read the full NRG report here.

Aging
People who read live longer than those who don’t, Yale researchers say
A study by Yale researchers finds that reading books in particular returns cognitive gains that increase longevity.
By Laurie Vazquez

Books
“Read 2,000 books”: Werner Herzog’s advice on reading
In the past, Werner Herzog has stated that you can’t be a filmmaker without a regular reading habit, from Hemingway to Norse mythology.
By Derek Beres
Up Next 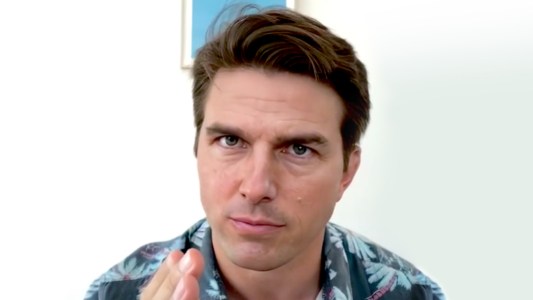 The Tom Cruise deepfake featured in a series of TikToks that went viral was created by a professional VFX artist.

Entertainment
Tom Cruise deepfake is the work of a pro VFX artist
By Kristin Houser
Subscribe to Freethink for more great stories
Subscription Center
Sections
Video
Freethink
Subscribe
We focus on solutions: the smartest people, the biggest ideas, and the most ground breaking technology shaping our future.
Subscribe