The ability to put one person’s face on another’s body in a video is nothing new — professional visual effects (VFX) artists have been swapping actors’ faces onto stunt doubles’ bodies for decades.

Deepfakes, however, are relatively new — in these videos, faces aren’t swapped painstakingly by VFX artists, but effortlessly by AI-powered software.

The clips currently aren’t nearly as convincing as professionally edited videos, but many are worried that they will be one day soon. If that proves true, anyone with a computer and the right software would be able to create deceptive deepfakes that could ruin lives or even destroy social trust.

Those fears reached a fever pitch in late February, when several near-flawless Tom Cruise deepfake videos in which he’s playing golf and performing magic tricks were posted to TikTok.

But, it turns out, the viral videos weren’t the work of some rando on the internet — a VFX artist that specializes in deepfake technology made them.

Chris Ume is one of about 20 deepfake artists and technicians working at Deep Voodoo, a studio founded by South Park creators Trey Parker and Matt Stone to make deepfake-based entertainment, including their Donald Trump-skewering web series “Sassy Justice” (which also features a Tom Cruise puppet).

Ume shared the TikTok channel hosting the Tom Cruise deepfake videos on his LinkedIn, and Fortune confirmed that he was the creator of the clips.

Ume had previously worked with Cruise impersonator Miles Fisher on a pair of Youtube videos in which he morphed Fisher’s face into that of the A-list actor.

He even released a video showing the effort that went into making the Tom Cruise deepfake, from training the AI to manually correcting the imperfections in the video it created.

(Fisher is also widely believed to be the star behind the star of Ume’s TikToks, but he’s yet to confirm that.)

Ume’s new Tom Cruise deepfake videos were viewed more than 11 million times on TikTok before being removed from the @deeptomcruise channel without explanation on March 3. (You can still find them elsewhere on the internet, though.)

We are simply not surrounded by deepfakes. We live in a world with a lot of shallowfakes.

If you do watch the videos, it’s important to keep in mind the effort that went into creating them, according to Sam Gregory, program director at Witness, a nonprofit that uses technology to defend human rights.

“The problem with coverage of the Tom Cruise video is that it over-emphasizes how easy it is to make a deepfake like this,” he told VICE News. “This is an excellent deepfake, made with effort, with an impersonator.”

“We are simply not surrounded by deepfakes,” he continued. “We live in a world with a lot of shallowfakes — simple, miscontextualized, or edited videos.”

Even if deepfake tech ever does get to the point that anyone can make a convincing video, the technology itself isn’t something to be feared, according to Ume.

“People just have to learn to be more critical — that’s the point,” he said in a 2019 interview with PBS affiliate WHYY. “They don’t have to be scared of deepfakes, because it probably existed even before you heard the word ‘deepfake.’ You just didn’t know it.”

“At least now, you know it exists,” he continued, “and you know you shouldn’t believe what you see.”

In that sense, Ume’s Tom Cruise deepfake videos might actually benefit society. Millions of people have now seen with their own eyes just how convincing deepfakes can be — even if they aren’t yet easy to make. 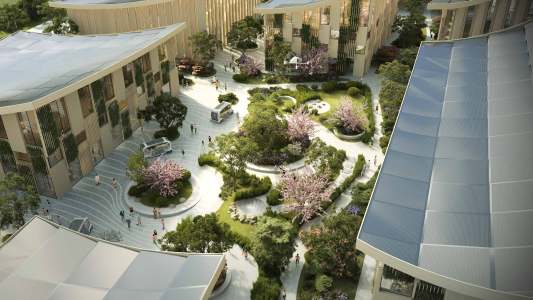 Urban Living
Futuristic city will be a testbed for robots & autonomous cars
Subscribe to Freethink for more great stories
Subscription Center
Sections
Video
Freethink
Subscribe
We focus on solutions: the smartest people, the biggest ideas, and the most ground breaking technology shaping our future.
Subscribe