Toyota is building Woven City in the shadow of Mount Fuji, on Honshu, Japan’s main island. Danish architect Bjarke Ingels is designing the futuristic city on the 175-acre site of a former factory, and the plan is for it to be environmentally sustainable.

The buildings will be constructed mostly from wood, solar panels will cover their rooftops, and hydrogen fuel cells will provide additional power to the city’s residents.

“The homes will use sensor-based AI to check occupants’ health, take care of basic needs and enhance daily life, creating an opportunity to deploy connected technology with integrity and trust, securely and positively,” Toyoto wrote in 2020.

The city will feature three types of streets: one for faster vehicles only, another for just pedestrians, and the third for a mix of pedestrians and people using slower personal mobility vehicles (presumably, scooters and bikes).

These streets will be woven into an organic grid pattern that Toyota hopes will facilitate the testing of autonomous vehicles.

“Building a complete city from the ground up, even on a small scale like this, is a unique opportunity to develop future technologies, including a digital operating system for the city’s infrastructure,” Toyota President Akio Toyoda said when announcing the futuristic city in 2020.

Initially, the futuristic city will be populated by just 360 people — mostly a mix of inventors, senior citizens, and young families — but eventually, the population will grow to 2,000, according to Toyota.

That’s tiny, as cities go, but on less than 1 square kilometer of land, it would make Woven City about as densely populated as Oakland.

“We welcome all those inspired to improve the way we live in the future, to take advantage of this unique research ecosystem and join us in our quest to create an ever-better way of life and mobility for all,” Toyoda said.

It’s not clear whether residents will pay rent, buy, or live for free in Woven City, nor whether they will own businesses there or the technologies they develop within city limits.

Before anyone can move into Woven City, though, Toyota will need to actually build it. Construction is set to begin in March, but the company has yet to say when it will be completed.

If/when residents do move into the futuristic city, they’ll experience the cutting-edge technologies that could one day make all our lives easier, healthier, and — Toyoda hopes — happier.

“The unwavering themes of the Woven City are ‘human-centered,’ ‘a living laboratory’ and ‘ever-evolving,'” he said at the groundbreaking ceremony.

“Together with the support of our project partners, we will take on the challenge of creating a future where people of diverse backgrounds are able to live happily.” 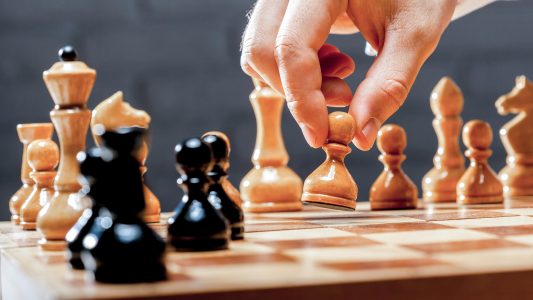 Maia is a chess AI designed to play like you, not crush you. Predicting the most human decisions may pave the way for AI to train and work with us.

AI
Meet the chess AI you might actually beat
Subscribe to Freethink for more great stories
Subscription Center
Sections
Video
Freethink
Subscribe
We focus on solutions: the smartest people, the biggest ideas, and the most ground breaking technology shaping our future.
Subscribe