The majority of the nearly 746,000 people in jail on any given day are eligible to vote. But, due to logistical hurdles, many still don’t have access to the ballot.

With the coronavirus pandemic complicating the election for voters on the outside, this hard-to-reach group could be even more marginalized. Advocacy groups across the country are stepping in to help inmates cast their ballot.

Two voting rights groups, Spread the Vote and Vote.org, joined forces to launch an initiative called Vote By Mail In Jail. Volunteers send informational postcards to inmates across the country and train jail staff to facilitate voter registration and voting. So far, they have 152 jails with an on-site partner to help inmates register to vote.

“Jail-based disenfranchisement is a complex system of conditions and factors and laws that make it incredibly difficult for incarcerated people to cast their ballots,” Dana Paikowsky, from Campaign Legal Center, told the Fulcrum.

She explained that when a group sent informative mailings to voters in an Arizona jail, officials confiscated them. Often, inmates don’t realize they maintain their right to vote. Even jail officials might not know if inmates remain eligible, or what responsibilities they have to assist voters. Because people of color are incarcerated at a higher rate, this population is disproportionately disenfranchised by jail policies.

While most states don’t allow felons to vote from prison while serving their sentence, most states do allow people with misdemeanor sentences to vote. These are typically low-level crimes with sentences from a few days to several months. And two-thirds of the jail population are people held pre-trial, who have been arrested but not convicted yet.

In 2018, 470,000 people (63%) were being held in jail pre-trial. A 1975 Supreme Court ruling held that eligible voters in jail can’t be denied their right to vote because they are incarcerated. But it doesn’t lay out any requirements for providing a means to register or vote. Registering or obtaining an absentee ballot from behind bars can be next to impossible.

Typically, voting rights groups like Spread the Vote work diligently in the months leading up to an election to visit jails, educate inmates, and trail jail staff to ensure eligible voters get access to the ballot. But the pandemic is adding another hurdle, as most jails are now closed to visitors.

Instead of giving up, advocacy groups are getting creative.

In North Carolina, Garry McFadden, Sheriff of the Mecklenburg County Detention Center, is determined to register at least 300 incarcerated people for the 2020 election.

Two years ago, he opened his jail to voter registration training — a program organized by the voting rights group You Can Vote. This year the training became virtual. McFadden designated an unused room so the You Can Vote members can hold their training via video chats, facilitated by guards, reports WFAE.

“They take this big flat-screen TV, and we just connect to Zoom,” said Zion Lemelle, organizing director of You Can Vote. “And they go to each unit. Then they literally have to unplug, go to the next unit, replug, get connected again, and then I do my spiel again.”

The voting rights advocacy group, Chicago Votes, pushed for new legislation in 2019 to ensure eligible voters who are incarcerated have access to the ballot. This year, Cook County Jail, one of the largest U.S. jails, with a population of more than 5,000 on any given day, was the first U.S. jail to become an official polling place. It operated as an election precinct for in-person voting during the March primary.

When the pandemic complicated things for the November election, and local officials considered returning to mail-in voting for inmates, Chicago Votes pushed back, insisting that in-person voting is “the most equitable way,” reports the Chicago Tribune.

“They are getting as equal access to the ballot as anybody who’s outside of jail, which is legally their right,” Stevie Valles, executive director of Chicago Votes, told the Chicago Tribune.

Three months ago, All Voting is Local and ACLU-Wisconsin released a report showing that most counties in the state lack policies detailing how people in jail can vote. Now the group is working with local jails to see who could oversee a voting process within the jail, according to TIME.

“When an eligible voter is denied the fundamental right to vote, not only is their voice silenced, but also the voices of their families and their communities,” Shauntay Nelson, the Wisconsin state director for All Voting is Local told TIME. “It further alienates these communities from a political process that’s supposed to work for them.”

*If you are an eligible voter, and anyone tries to stop you, call the Election Protection Hotline at 866-687-8683.

We’d love to hear from you! If you have a comment about this article or if you have a tip for a future Freethink story, please email us at [email protected].* 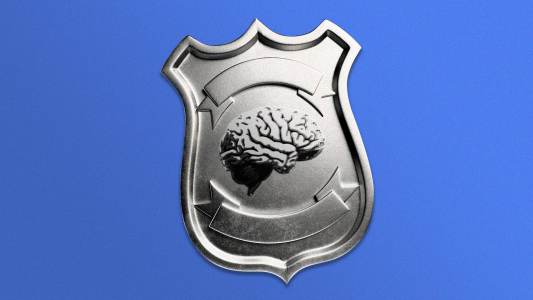 The Maplewood mental health unit anticipates 911 calls and circumvents them before they happen.

Criminal Justice
The law enforcement unit that responds to a crisis before it happens
By Teresa Carey
Subscribe to Freethink for more great stories
Subscription Center
Sections
Video
Freethink
Subscribe
We focus on solutions: the smartest people, the biggest ideas, and the most ground breaking technology shaping our future.
Subscribe