Thomas Weinheimer was in the army for 22 years. During his five combat tours on Iraq’s border and in Afghanistan, he cleared routes, searching for IEDs and possible attack points, then safeguarded them so other convoys could pass. He also served time in an airborne unit, where he hurtled himself from an airplane 86 times. He was, “the guy hanging onto the side of the airplane,” as it flew along. There is no doubt, Thomas is brave. But when it came to adjusting to “normal life,” Thomas turned to Warrior Expeditions, a wilderness experience opportunity for Veterans, for support.

In the spring of 2019, Thomas hit the Mountains-to-Sea Trail in North Carolina for two months — sometimes alone, sometimes with Erin, another army veteran. Freethink spoke with Thomas about life in the military, life on the trail, and how being in nature has helped him adjust back to civilian life.

“You’ve got to recondition yourself to go back to society and civilization.”

Freethink: Warrior Expeditions is a (wilderness experience) program that is specifically for veterans. Why is it beneficial to veterans to go on a hike like that?

When I came off the trail, I had a problem even walking through parking lots because I wasn’t used to having cars driving past me. You’ve got to recondition yourself to go back to society and civilization.

Freethink: I guess you could call it a type of culture shock when you’re coming back from the wilderness. Do you feel the same when you’re finished being in the military? To use your words, did you have “to recondition yourself to go back to society and civilization?”

Thomas: Yes. I think the biggest thing was not knowing what tomorrow was going to bring. In the military, you know every Monday you got to wake up early, do your physical training and take care of all the different tasks that are given to you. Even on deployments, you know that every morning you’re going to wake up and work really hard for a long day. But once all that is finished, you don’t have something in front of you that is a guarantee. Not knowing what kind of job you’re going to get or not knowing if you’re going to get a job — was a real eye-opener. That was probably the hardest part.

Freethink: How do your thoughts while on the trail differ from them in your day-to-day life in the military?

Freethink: I’ve never been in the military, but I get a sense that comradery is very important. How different is it to be on the trail when you’re all by yourself?

Thomas: In the military, I jumped out of airplanes. In the middle of the night, if you jump out of the airplane, everything’s totally dark. You hit the ground and there’s a shadow off in the distance. That shadow just became your best friend. You don’t know who it is, don’t know their names, probably never will. On the trail, it’s similar to that. You come across a person out there while you’re hiking and you don’t even have to know their name. But you start taking care of the other person and talking to them. You let them know what’s going on, or what the weather’s going to be like, or what’s the trail ahead. That comradery on the trail is definitely out there and you don’t realize it until you’re actually out there doing it.

Freethink: I imagine that you witnessed a lot of trauma and loss in the military. Has the trail hike helped you deal with that? How?

Thomas: In some ways it’s difficult — seeing the situations or what took place and knowing and hoping that nothing like that will ever happen again. I don’t know if I want to say “block it out,” but I try to not remember it or bring it back up. Hiking allowed me the time to think of what took place.

“The trail is completely different… In the military, you’re so focused on trying to take care of other tasks and other people and trying to accomplish the total mission.”

Freethink: Tell me about a challenging, memorable day on the trail.

Thomas: It was a day that (Erin and I) had. It was pouring rain. It was cold out and there was nothing we could do about it except laugh and smile. We had a good time. Every time we turned around we just started laughing. The trail was three inches of water and we were just walking along. It was like a waterfall along the entire trail. Wet and cold. We were laughing about it. I always say some of the worst days are the ones that are the most memorable. Those are the ones you talk about years down the road. It’s those rough days that you overcame and look back and really enjoyed.

Freethink: Do you feel the same way about those challenging days in the military?

Thomas: Yes. I looked at it as more of a challenge and said, “Put a smile on my face and I’m going to go out there and be the best at it.” That’s exactly what I did in the military.

“Hiking allowed me the time to think of what took place.”

Freethink: What was the best and the worst meal on the trail?

Thomas: The best meal on the trail was probably in the Surf City area. One of the veterans, a Marine, took me out to dinner. I don’t even know what I had to eat, but just being there talking to them all, it was really nice. I really can’t think of the worst meal on the trail because I enjoyed basically everything.

Freethink: How about while you were in the military? What was your best and worst meal?

Thomas: We were in Kandahar in Afghanistan. I just got my tray of food, just set it on the table, and was about to sit down when a huge explosive went off about a block away. It blew out the windows of the dining facility and the drop ceiling fell down. All that stuff fell down onto my food. I laid on the ground for a couple of minutes until they gave us the “all-clear.” Then I looked at my food and it was just trashed. I threw it away and walked out of there and didn’t have a bite to eat.

Freethink: A building practically came down on top of you and all you were thinking about was your food?

Thomas: Yes, I was there to eat and couldn’t. That’s why I would guess that I’ve never had a bad meal when I was on the trail because of that day in Afghanistan.

Thomas: Comradery. I can go to the VFW (Veterans of Foreign Wars) or go to a veterans’ parade and meet a whole bunch of new people that I’ve never met before. Like I said, don’t even have to know their name, but we’re all brothers and sisters when we stand there beside each other.

Watch our full feature with Thomas and Warrior Expedition

Psychology
“Laughing gas” may offer quick, long-lasting relief from depression
With ketamine showing potential as an antidepressant, researchers investigate another anesthetic: nitrous oxide, or “laughing gas.”
Up Next 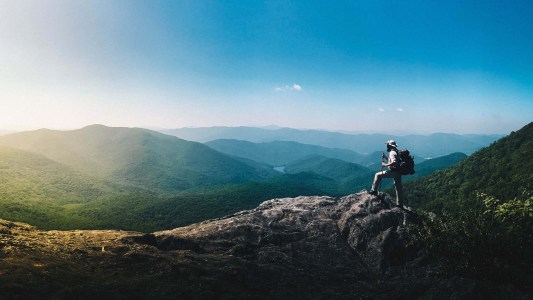 These long-distance treks use the power of nature over three to six months of exploration to help heal the invisible wounds of war, and the results are incredible.

Mental Health
Wilderness therapy: A path to healing for Veterans10:12
Subscribe to Freethink for more great stories
Subscription Center
Sections
Video
Freethink
Subscribe
We focus on solutions: the smartest people, the biggest ideas, and the most ground breaking technology shaping our future.
Subscribe