The Great Barrier Reef just had its annual coral spawn — and it defied all expectations. A kaleidoscope of color exploded from the world’s biggest reef, and some scientists witnessed it firsthand, catching it all on video.

While conducting underwater research near Cairns, Queensland, scientists saw the event, where corals simultaneously release massive amounts of sperm and eggs. They say it is proof that the reef can recover, despite stress from bleaching and other environmental concerns.

New life: The yearly coral spawning only happens between October and December, when billions of sperm and eggs are released at once. And this year’s event is being called a sign that the threatened reef is regenerating.

“Nothing makes people happier than new life — and coral spawning is the world’s biggest proof of that,” Australian marine biologist Gareth Phillips said in a statement.

Phillips was among the researchers that got to witness the event first-hand. His team from research center Reef Teach dove to the bottom of the reef to capture the moment on film. This footage will help scientists track the corals this year and the Great Barrier Reef’s overall health.

“I’ve seen the corals all go off at once, but this time there seemed to be different species spawning in waves, one after the other. The conditions were magical with the water like glass and beautiful light coming from the moon,” Phillips said, reports CNN Travel.

Coral spawning is a well-coordinated yearly event. Throughout the year, corals reproduce asexually by dividing into new corals. But every fall, the corals release billions of sperm and eggs into the ocean at the same time. It looks like snowfall underwater.

“It’s a strong demonstration that its ecological functions are intact and working after being in a recovery phase for more than 18 months,” Phillips said.

Reefs in trouble: Coral reefs across the globe have been in decline in recent years due to climate change and ocean acidification.

Warming temperatures and rising acidity (due to the absorption of excess carbon dioxide from the atmosphere) can cause coral bleaching. This bleaching occurs when stressed corals release the colorful algae that dwell inside their tissue, causing the corals to bleach or turn white.

Once this happens, coral reefs rarely come back to life and the entire reef ecosystem, which supports fish and other marine life, begins to deteriorate.

Coral reefs in the U.S. alone support a $3.4 billion dollar industry that includes fishing, tourism, and coastal protection. They protect coastlines from floods, provide food and income to millions of people, and they are home to many diverse and endangered species.

Many bleaching events have occurred in recent years, destroying large swaths of the global reefs. In 2016, a mass bleaching event killed 29% of the Great Barrier Reef’s shallow-water corals. Another bleaching event, from 2014-2017, caused heat stress in 75% of coral reefs globally. Nearly 30% died.

Because of this recent history, the scientists were thrilled to see the reef spring to life during the coral spawning event. 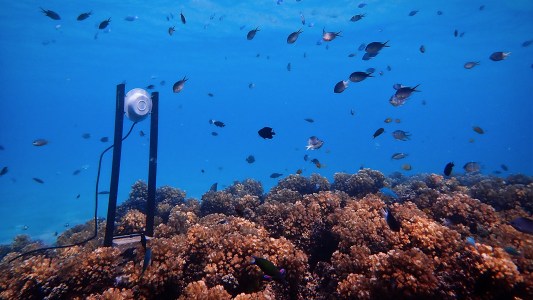