Having just lived through Earth’s hottest month on record, we can see the impacts of climate change all around us. But out of sight, deep in the ocean, coral reefs are suffering through heat waves too. Because of rising temperatures, many of them are experiencing damaging coral bleaching.

But researchers have just discovered that there may be an antidote — a generous dose of probiotics.

The problem with corals: Coral reefs have been experiencing unprecedented mass coral bleaching, which occurs when rising ocean temperatures disrupt the symbiotic relationship between the coral and its algae.

“Overall, we see a breakdown of symbiotic relationships, and all the microorganisms start to struggle,” Raquel Peixoto, a marine ecologist at King Abdullah University of Science and Technology, told Nagaland Post. “We wanted to find out if we can protect them against mortality.”

What they did: A team from King Abdullah University of Science and Technology exposed six species to coral bleaching conditions by creating two mini coral reefs in aquariums. In both aquariums, they replicated a heatwave.

Then, they gave one aquarium a dose of beneficial microorganisms for corals (BMC) and the other a benign saline solution. All the corals suffered from the heatwave, but giving corals a blend of helpful bacteria prevented mortality during the simulated heatwave. The probiotic blend increased the coral’s survival rate by 60 to 100%.

“We observed a plot twist from the group that we treated with probiotic BMC. That was a nice surprise,” said Erika Santoro, the study’s lead author, reports Tech Explorist.

The probiotic blend increased the coral’s survival rate by 60 to 100%.

Based on their findings, published in the journal Science Advances, probiotics may help certain corals withstand heat stress and reduce coral bleaching.

What this means: With the looming promise of warmer, more acid oceans, marine scientists have been looking for ways to enhance the survival prospects of the world’s coral reefs. From finding super corals ready to withstand climate change to using CRISPR to protect corals from coral bleaching, and even growing corals in a lab, the efforts are diverse and creative.

“The results are incredibly promising,” Blake Ushijima, a microbiologist at the University of North Carolina Wilmington who wasn’t involved in the probiotic research, said. “But we’re just scratching the surface. We don’t understand how a lot of these beneficial microbes work.”

Although it is still at the very early stages, probiotics could one day be a meaningful remedy to slow or stop the damage climate change is doing to the coral reefs.

Agriculture
An ancient enzyme could supercharge photosynthesis
Researchers have resurrected an ancient version of the enzyme Rubisco in the hope of supercharging photosynthesis in today’s plants.
Up Next 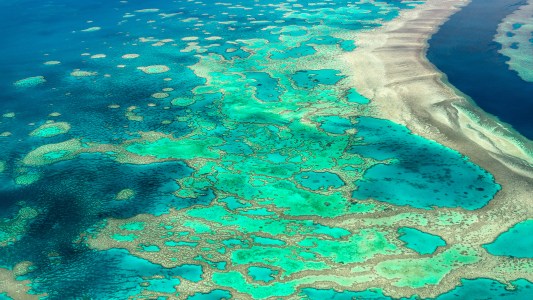 Climate Crisis
How artificial clouds could save the Great Barrier Reef
Subscribe to Freethink for more great stories
Subscription Center
Challenges
Video
Freethink
Subscribe
We focus on solutions: the smartest people, the biggest ideas, and the most ground breaking technology shaping our future.
Subscribe