Carbon dioxide in the ocean is naturally extracted and formed into seashells by mollusks, like clams and other sea creatures. Taking their inspiration from nature, scientists combating climate change aim to sequester the greenhouse gas in artificial seashells.

The problem: We’ve heard it before: there is too much carbon dioxide in the atmosphere. But, where the conversation was once exclusively focused on reducing emissions and incorporating more renewable energy sources, scientists are also looking for creative ways to draw carbon dioxide out of the atmosphere and lock it away forever.

Wild ideas like genetically modified trees or balloons that sponge up carbon dioxide are no longer surprising. But the latest proposal to hit the carbon market has a charming twist — seashells.

A team of scientists from UCLA proposes turning atmospheric carbon dioxide into seashells and storing it forever.

The inspiration: Shells are naturally formed by mollusks from carbon dioxide dissolved in the ocean water. The ocean and atmosphere form a single system — as CO2 is removed from the water, the ocean will then draw more CO2 from the atmosphere.

So, the team wondered if they could intervene to speed up the process of converting carbon dioxide into minerals, like calcium carbonate, the main ingredient in seashells — essentially making shell fragments that stores carbon permanently.

“We were thinking, What would be one of the best ways for us to start trapping CO2?” Dante Simonetti, a chemical and biomolecular engineer at the UCLA Samueli School of Engineering, told Fast Company. “Well, what about the formation of seashells? This is a reaction that happens naturally and a reaction that we had all studied in previous projects. So we started thinking, How can we leverage that at a scale where it will start affecting atmospheric CO2 levels?”

The machine: The team built a prototype device that collects carbon-saturated seawater in a chamber. Then, as the saltwater passes through a screen, the mesh charges the water, sparking a chemical reaction. Dissolved CO2, combined with calcium and magnesium, forms limestone and magnesite — basically, bits of seashells.

Then the machine returns carbon-free seawater to the ocean, where it can then soak up more atmospheric carbon dioxide. For long-term carbon storage, the “shell” fragments can be tossed into the sea or buried on land, reports Fast Company.

As a byproduct, the device creates hydrogen, which could help power the equipment or be sold as fuel.

Progress: The idea is still in its infancy but already gaining attention, namely from Stripe. The tech company is investing in numerous carbon removal technologies, including projects like offshore kelp farms. (However, the kelp farms are further along: they already have seaweed in the ocean, sequestering carbon  right now.)

But the endorsement from Stripe provoked the next step for the UCLA team — a business called Seachange, which will build the first machine outside of the laboratory, where they can get real-world data.

Climate Crisis
NASA detects 50+ methane “super-emitters” from space
A new instrument aboard the International Space Station has been used to identify more than 50 “super-emitters” of methane.

Climate Crisis
Solar geoengineering could cool Earth, but some regions might continue warming
Some governments might try to “geoengineer” the planet by spraying substances into the upper atmosphere to reflect sunlight away from Earth.
Up Next 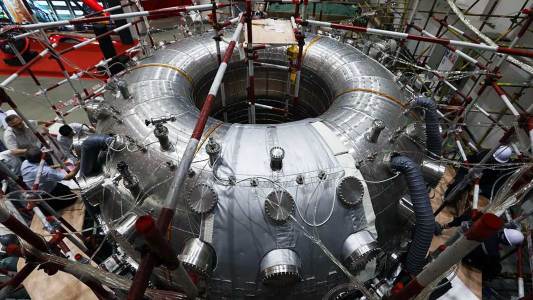