Molten salt reactors, a type of nuclear reactor first explored in the 1950s, could be the future of clean energy — if we can overcome the problems that have held them back for more than half a century.

Nuclear fission occurs when a neutron slams into the nucleus of an atom, splitting the atom. This releases a tremendous amount of energy, as well as additional neutrons that can then split more atoms, creating a self-sustaining fission reaction.

Nuclear reactors control the fission process so that the energy, released as heat, can be used to boil water, creating steam that can spin electricity-generating turbines.

The process doesn’t create carbon emissions, and it can take place regardless of whether the sun is shining or the wind is blowing, making nuclear energy potentially an important ingredient for a clean energy future.

It takes approximately 7 years and $10 billion to build a nuclear plant like the ones we already have.

However, today nuclear accounts for just 10.3% of the world’s electricity generation, and the number of reactors closing is outpacing the number being built.

Part of the reason why is that it takes approximately 7 years and $10 billion to build a new nuclear plant like the ones we already have, and some would-be operators are wary of making such a big investment, especially when electricity from natural gas and renewables is getting cheaper.

At the same time, many potential builds face pushback from a public concerned about the possibility of a nuclear disaster, like Chernobyl or Fukishima, despite the fact that nuclear energy historically is far safer than coal or natural gas.

To increase the amount of electricity generated by nuclear fission, we may need to rethink how we harness it.

In most of today’s nuclear plants, water is pumped under high pressure to the reactor’s core where fuel pellets encased in metal rods undergo fission. This heats the water to about 600 F, but the high pressure prevents the water from boiling off.

The super-hot liquid water is then pumped past a chamber containing more water. Its heat causes that water to boil, creating the steam needed to spin the turbines. The cooler water then flows back into the fuel chamber to be reheated so the cycle can continue.

The high pressure needed to keep super-hot water as a liquid increases the likelihood of a leak, and if water leaks out, the fuel can overheat, melting the containment rods and potentially releasing radioactive material into the water and the environment.

To prevent this, reactors require many backup systems and redundancies, which further increases their cost and complexity.

This design isn’t our only option, though.

In the 1950s, US researchers started exploring the concept of molten salt reactors, which use molten salt — salt that’s solid at room temperature, but liquid at high temperatures — in place of water as the material transferring the heat and keeping the fuel at a stable temperature.

The type of salt proposed for these reactors remains liquid at temperatures as high as 2,500 F — without any pressurization. That higher temperature would increase the reactor’s efficiency and generate more electricity, while the lack of pressurization would reduce the risk of a leak.

Instead of solid fuel rods, separate from the water that transports the heat, some molten salt reactor designs call for the fuel to be dissolved in the molten salt itself.

This eliminates the risk of a meltdown — the fuel can’t melt if it’s already liquid — and if there was a leak, any salt and fuel that escaped would rapidly solidify into rock as it cooled. This would be easier to clean up than the radioactive water or steam released if a pressurized water reactor leaks.

Molten salt reactor designs also include a safety feature called a “freeze valve” or “freeze plug.” This plug separates the molten salt mixture above from a holding tank below it. If the mixture ever gets too hot, the valve melts, and the molten salt falls into the tank under the pull of gravity — stopping a disaster even if all the backup systems failed.

While we don’t know for sure what it would cost to build a molten salt reactor, analysts expect that construction would be cheaper than standard water reactors since the design includes fewer parts.

The reactors may also be more reliable — today’s reactors typically have to go offline every 18-24 months for refueling, but the spent fuel dissolved in molten salt could potentially be processed out and new fuel added while the reactor was operational.

The promise of molten salt reactors has yet to be realized, though.

Had those technical problems not occurred, it’s still not clear how long the reactor would’ve been able to withstand another problem with using molten salt.

“Even today, no material can perform satisfactorily in the high-radiation, high-temperature, and corrosive environment inside a molten salt reactor,” energy and resources expert M.V. Ramana wrote in the Bulletin of the Atomic Scientists in June 2022.

No one has operated a molten salt reactor since the MSRE shut down, but with climate change exacerbating the need for more clean energy, we’re now seeing a surge of renewed interest in the design.

Once complete, the MCRE will be the world’s first critical fast-spectrum salt reactor — fast reactors are able to sustain fission without using a moderator to slow the neutrons released during the fission process, which increases their efficiency.

Data from the test reactor will inform the development of TerraPower’s Molten Chloride Fast Reactor — the company expects to build a 180-megawatt demo of that system in the early 2030s, which would be enough to power about 90,000 homes.

In August 2022, China gave researchers at the Shanghai Institute of Applied Physics (SINAP) permission to start up an experimental molten salt reactor, fueled by a mix of uranium and a much more abundant element, thorium.

“For now, there is enough uranium to fuel all operating reactors,” nuclear reactor specialist Sylvain David told FRANCE 24 in December 2021. “But if the number of reactors increases, we could reach a situation where supply would no longer keep up, and using thorium can drastically reduce the need for uranium.”

While SINAP’s molten salt reactor is only designed to generate enough electricity for about 1,000 homes, if testing goes well, China is ready to build a larger version that could power hundreds of thousands of homes.

In October 2022, researchers at Brigham Young University announced a design for a molten salt reactor they say is powerful enough to supply 1,000 American homes with electricity — and small enough to fit in the bed of a 40-foot truck.

That small size would presumably be far cheaper and simpler to build than a standard nuclear reactor plant and could make it easier to bring nuclear power to remote areas, but there are currently no plans in place to build one of the reactors.

BYU researcher Matthew Memmott did tell the Register, however, that his team has also developed a method for making salt less corrosive by removing water and oxygen from it. They’ve already partnered with Utah’s San Rafael Energy Research Center to build a salt-refining center for operators of molten salt reactors — whether mini or full-sized.

These are just a few of the many groups taking a closer look at molten salt reactors, but even if one or more of their designs is built, we won’t know for some time if they’ve managed to overcome the corrosion problem that has long held back the technology.

“The problem with corrosive products is that you don’t realize their damage until five to 10 years after,” Francesco D’Auriam, a nuclear reactor technology specialist at the University of Pisa, told FRANCE 24.

If today’s researchers can build a molten salt reactor that withstands corrosion and overcomes the technical challenges experienced by the MSRE, though, the device could increase the amount of electricity generated by nuclear fission — and bring us closer to a clean energy future. 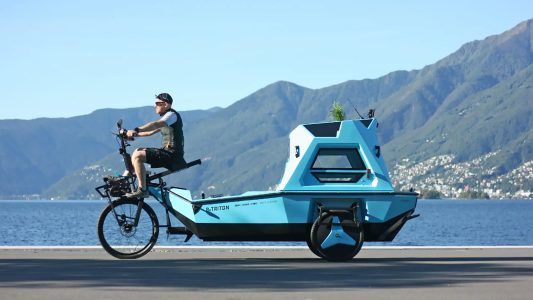 Latvian startup BeTRITON’s amphibious electric tricycle will take you from the road to the water to the campsite.