A nonprofit research institute is open-sourcing the blueprints for a nuclear power plant in an attempt to accelerate the adoption of nuclear energy.

Through the Energy Impact Center’s (EIC’s) OPEN100 project, developers will have free access to construction plans, cost breakdowns, and other data needed to build a nuclear power plant and provide communities with an emissions-free alternative to fossil-fuel power.

“Nuclear power isn’t just part of the solution to addressing climate change; it is the solution,” Bret Kugelmass, the EIC’s managing director, said in a press release.

How Does a Nuclear Power Plant Work?

Nuclear power isn’t anything new —  the first plant opened in the United States in 1958, and today, the nation is home to 60 nuclear power plants.

These plants generate electricity through nuclear fission — the splitting of atoms to release energy — which takes place within a device called a reactor.

Nuclear power plants use the energy from fission to boil water, turning it into steam. The steam then spins the blades of a turbine, which drive generators that produce electricity.

If a nuclear power plant is built in a place with an abundant supply of water — near a river or lake, for example — the steam is released into the air.

If not, it’s sent to a separate part of the plant for cooling. Once it turns back into water, it goes through the process all over again.

Despite being far more environmentally friendly than fossil fuel-powered plants, nuclear power plants produce just 20% of the U.S.’s electricity compared to the former’s 62%.

One of the major barriers to the adoption of nuclear energy is the cost and time needed to build a large nuclear power plant — upwards of $10 billion and several years.

The EIC project hopes to eliminate those barriers. The nuclear power plant model featured on the OPEN100 project’s web platform would reportedly take just $300 million and 18 months to construct.

The size of the OPEN100 plant is a major contributor to those savings — at 100 MWe (megawatts electric), the plant is far smaller than the ones currently operating in the U.S., which range from 582 MWe to 3,937 MWe.

But while the output might be smaller, the EIC claims the cost of generating electricity is roughly equivalent to the cost of producing it through the burning of fossil fuels, such as coal or gas.

A video shared on the OPEN100 website shows how this small size could also allow for developers to build one of the power plants on what looks like a single city block.

That square footage needed might be accurate, but unless current regulations change, a nuclear power plant would likely never be built in such a densely populated area.

Location aside, though, the OPEN100 plans do provide a viable path forward for any developers interested in building a nuclear power plant without investing billions of dollars or nearly a decade of time — and that could potentially increase the adoption of this environmentally friendly alternative to fossil fuels. 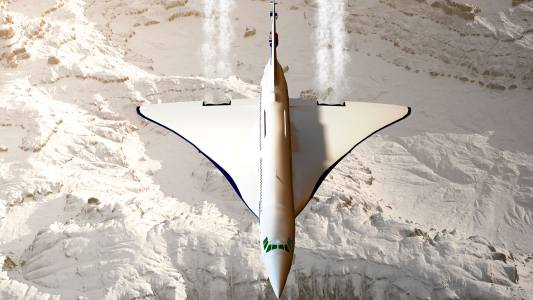 A study found that flying a small percentage of planes at slightly different altitudes could significantly decrease contrails, a global warming contributor.