Air travel accounts for about 2% of global carbon emissions, and until the aviation industry finds a way to end its dependence on fossil fuels — a huge task — planes will continue to pump greenhouse gases into the atmosphere.

Carbon emissions aren’t the only way airplanes harm the environment, though.

Contrails — the wispy white streaks left in the sky after a plane passes overhead — also contribute to global warming, and according to a new study, addressing that problem could be far easier than revamping the entire aviation industry: we just need to fly some planes at slightly different altitudes.

Contrary to what conspiracy theorists want you to believe, contrails aren’t some government-led conspiracy to control the weather or the population. They are ice crystals that form around the black carbon particles in a jet engine’s hot exhaust as it meets frigid, low-pressure air.

Contrails typically disappear within a few hours, but during that time, they can prevent heat from the Earth’s surface from escaping into the atmosphere, an effect called “radiative forcing.”

“A really small proportion of flights are responsible for the vast majority of contrail climate impact.”

According to one 2011 study, if you combined all the emissions from all the planes flown since the dawn of aviation, they still wouldn’t have as significant of an impact on global warming as contrail clouds.

That’s not to say that eliminating carbon emissions shouldn’t be a priority for the aviation industry, but developing the fuels, vehicles, and infrastructure needed to achieve that goal will take time.

This new Imperial College London-led study, which was published in the journal Environmental Science & Technology, outlines a way the industry could address its climate impact sooner, by focusing on contrails.

Contrails only form when a plane is flying at an altitude with a specific humidity level and air temperature, so researchers already knew that there was a chance we could eliminate contrails by avoiding those regions.

However, the path a plane travels is carefully chosen to minimize the amount of fuel needed to get from point A to point B, and some have expressed concerns that the environmental benefits of reducing contrails by altering flight paths might be negated by increased fuel burn and carbon emissions.

To determine whether altitude changes would have a net positive impact on the environment, the ICL team conducted advanced computer simulations of flights over Japan.

From these simulations, they discovered that a scant 2% of the flights caused 80% of the airspace’s radiative forcing.

Adjusting the altitudes of just 1.7% of all the flights, then — having the planes fly either 2,000 feet higher or lower than they would normally — would decrease the warming impact of contrails by 59%, while only increasing fuel consumption by 0.014%.

“A really small proportion of flights are responsible for the vast majority of contrail climate impact,” lead author Marc Stettler said in a news release, “meaning we can focus our attention on them.”

The team claims that the reduction in contrail-caused warming would outweigh the increased carbon emissions. But given that those emissions have a longer-term climate impact than contrails (carbon dioxide can stick around forever), they decided to use their simulation to see if they could reduce contrail formation without increasing emissions at all — and found that they could.

“We’re conscious that any additional carbon dioxide released into the atmosphere will have a climate impact stretching centuries into the future,” Stettler said, “so we’ve also calculated that if we only target flights that wouldn’t emit extra carbon dioxide, we can still achieve a 20% reduction in contrail forcing.”

The researchers are now looking for airlines and air traffic controllers willing to explore ways to implement their altitude adjustments — meaning cleaner air travel could be just on the horizon. 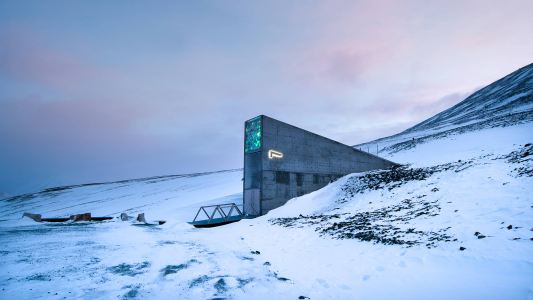 Norway’s Svalbard Global Seed Vault, also known as the “Doomsday” Vault, now contains more than one million varieties of seeds from across the globe.