Scientists are assembling a patchwork of photographs (a technique called photogrammetry) to study coral reef biology — and the resulting 3D model is a work of art.

Sandra Brooke studies coral reefs in the last place you’d expect to find them — 500 meters below the water’s surface, where the conditions are too challenging for human explorers. So, even today, these corals remain a mystery.

Last year, Brooke, a Florida State University oceanographer, boarded a research vessel and headed out to sea to place two autonomous “benthic landers” on the seabed in a coral colony, 120 kilometers off the west coast of Florida. The observation platforms housed an assemblage of data-recording instruments, and this fall, Brooke will return to the same spot to recover the benthic landers and snap hundreds of pictures of deep-sea corals. With this data, she hopes to find out more about what makes these mysterious corals thrive.

Deep-sea corals and shallow-water corals share an important commonality — they are biological hotspots and home to a diversity of sea life. But they are otherwise very different. Shallow-water coral reefs thrive on nutrients that algae make using sunlight. But in the deep sea, the pitch-black water means corals must find food in other ways, relying on gathering organic material like zooplankton, tiny drifting animals.

Even their structure is different. Unlike shallow-water coral colonies, which form a solid geological structure, deep-sea corals expand in a latticework of coral offshoots — a pattern like a trunk and branches of a tree. The outer branches block the growth of the inside branches, which die and collapse into a mound of sediment, to be replaced by a new generation of corals. This cycle of growth, collapse, growth, collapse continues, building the mound into a massive reef — as much as 100 meters tall and several miles wide.

“Let’s not destroy (deep-sea coral) before we understand what it can do for us.”

Brooke is especially interested in understanding the coral’s health and the influence of physical and chemical properties, like food or temperature. But to do that, she needs to get an accurate measurement of their growth rate, and current data is limited.

Right now, scientists measure coral growth much like they measure tree growth, where cross-sections of corals reveal growth rings that can be counted to determine the age. But this technique only takes into account the coral’s trunk. It doesn’t give researchers an idea of the colony’s height, or the extent of branching. So, Brooke is testing the effectiveness of photogrammetry as a means to measure coral growth.

Photogrammetry is a technique of using photos to create 3D models. By uploading pictures of corals into a photogrammetry software program, Brooke and Abigail Engleman, her team member, can stitch together a 3D model of the reef with striking accuracy.

The team then compares coral growth measurements between the 3D models and real coral specimens they collect from the deep sea. This comparison helps them determine if this is an accurate means to measure and study deep-sea corals.

Brooke’s hope is that in the future, with advances in camera technology, she can capture photos of the corals in a non-invasive way, by deploying autonomous underwater drones equipped with cameras.

“So, if this technology works, and is accurate enough, then then we can apply this to a whole number of different things, not just in the deep sea,” says Brooke.

Her work is the deep-sea counterpart to the Hydrous, a project led by marine biologist Erika Woolsey, that used photogrammetry to create accurate 3D renderings of living corals. Her team compiled photographs captured by SCUBA divers on shallow-water reefs. Their 3D models are available for free to educators, scientists, and artists.

“The 3-dimensional reef structures built by corals are vital to providing habitat for other marine animals. While researchers have known this for a long time, the widespread use of underwater photogrammetry is relatively new,” said Woolsey in an email.

She adds that although corals cover less than 1% of the seafloor, they support 25% of global marine biodiversity, from snails and crabs to fish, sharks, and whales.

Both Brooke and Woolsey say coral reefs are like the rainforests of the ocean, providing a multitude of economic and environmental benefits. They are home to a diverse abundance of sea life, including commercially important fish. They can protect the coast by acting as a buffer from storms and floods. And they are a tourist destination.

But the value of deep-sea reefs is less appreciated.

“Because we don’t know, let’s take the precautionary approach, and let’s not destroy it before we understand what it can do for us,” Brooke says. She adds that, since corals use chemicals to defend themselves, she wouldn’t be surprised if, among their many chemical compounds, there might be an important one for medical use.

While Brooke continues to study deep-sea corals, she is already applying the photogrammetry technique to measuring sponge growth, which is also challenging because they grow in an uneven pattern.

“This technology will allow us to rethink the way we measure things,” she says. 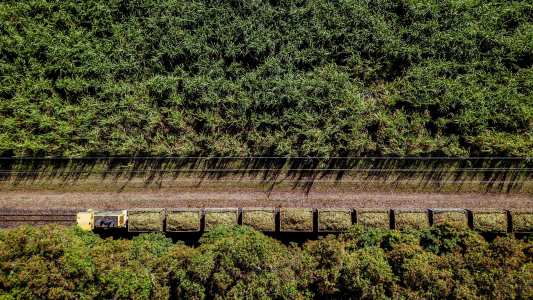 Fertilizer is needed to feed the world, but its production comes with a carbon footprint. This solar-powered strategy may reduce that.

Food
Fertilizer feeds half the world. Can we make it without fossil fuels?
Subscribe to Freethink for more great stories
Subscription Center
Sections
Video
Freethink
Subscribe
We focus on solutions: the smartest people, the biggest ideas, and the most ground breaking technology shaping our future.
Subscribe