For decades, the possibility of using hydrogen as a carbon-free fuel has remained a captivating concept. But the need to store it at extreme pressures and ultra-cold temperatures has been an ever-present barrier to its more widespread rollout.New experiment produces hydrogen with LEDs

One possible solution is to use liquid ammonia (NH3) to store the hydrogen atoms, and then break the compound down when you need to extract the hydrogen for fuel. Ammonia is much easier to store and transport, but extracting hydrogen from it is tricky.

One way to trigger this decomposition of ammonia is by using copper nanoparticles decorated with clusters of ruthenium atoms – which catalyse the reaction.

When these nanoparticles are illuminated with ultra-fast laser pulses, the effect can excite the electrons on their surfaces, leaving behind positively-charged holes. Together, these electron-hole pairs will readily react with molecules like ammonia. This multi-step process ultimately releases pure hydrogen, leaving the catalysing nanoparticles unchanged for the next reaction.

The challenge: Despite the benefits of this technique, the ruthenium photocatalysts best suited for the process are both rare and expensive, making it especially difficult to recreate the process on industrial scales.

Alternatively, ammonia can be broken down by replacing ruthenium with “transition” metals like iron, which are cheaper and more abundant. This approach has its own problems, however.

Compared with elements like ruthenium, which lies in the platinum group of metals, transition metals form far stronger bonds with the intermediate products during the breakdown of ammonia – preventing the reaction from progressing further.

To spark the reaction, transition metal photocatalysts must instead be heated to temperatures exceeding 400 degrees. This ultimately makes the process both similarly costly, and far more energy-intensive, than just using ruthenium.

LEDs and quantum simulations: A team of researchers led by Naomi Halas at Rice University, Houston, may have just found a way around this challenge. Instead of heating transition metals, the team illuminated them with a bright, finely-tuned LED.

To optimise the frequency and intensity of this light, the researchers drew from a series of quantum simulations, carried out by Emily Carter and colleagues at Princeton University. Using these virtual experiments, they probed the molecular-scale interactions taking place between the LED’s light, and the electron-hole pairs which formed on the nanoparticle surfaces.

With the ability to predict these deeply complex reactions, Halas’ team could construct an optimal setup for transforming LED light into chemical energy. In their experiment, they illuminated copper nanoparticles, adorned with clusters of iron atoms, then measured the amount of pure hydrogen they could extract from liquid ammonia.

Producing hydrogen: Over the next few hours, ammonia molecules were broken apart thousands of times faster than in previous experiments where transition metals were used as a photocatalyst.

After six hours, the iron’s performance remained on par with far more expensive ruthenium-coated nanoparticles – both without the need for high temperatures, and with a similar concentration of metallic atoms.

Upscaling production: One of the biggest remaining barriers is the need to improve on existing methods for ammonia production in the first place. For now, this is an energy-intensive process, where fossil fuels must be subjected to high temperatures and pressures.

Once produced, however, liquid ammonia can be easily stored and transported at room temperatures and pressures, offering a far more realistic alternative to storing hydrogen fuel directly. There are also efforts underway to produce ammonia from green hydrogen made with solar energy, rather than the current process that relies on natural gas.

On top of this, LEDs are already highly effective at converting electrical energy into light, and improvements to this efficiency are only expected to skyrocket further in the coming years. In turn, LED light could be produced in increasing abundance by renewable energy sources – presenting a promising route forward in the fight against climate change. 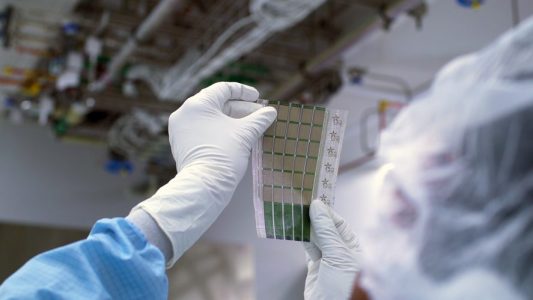 MIT researchers have developed a scalable fabrication technique to produce ultrathin solar cells that can be stuck onto any surface.

Clean Energy
Paper-thin solar cell can turn any surface into a power source
Subscribe to Freethink for more great stories
Subscription Center
Sections
Video
Freethink
Subscribe
We focus on solutions: the smartest people, the biggest ideas, and the most ground breaking technology shaping our future.
Subscribe