In East Anglia, a region in the east of England, a hodgepodge group of landowners — farmers, private homes, municipalities, churches, schools, energy firms — are coming together in one of the most significant rewilding projects in England.

The bold plan is to set aside 20% of East Anglia for wildlife and return it to nature by 2070.

“We want to wake up the regional collective consciousness,” Hugh Somerleyton, a co-founder on the project, told The Guardian. “If you’re prepared to rewild 20% of your backyard, that humbles the farmer because you’re not getting a grant for it. We in the east want to do it together and not wait for the government.”

What is rewilding? Rewilding is a simple, forward-thinking conservation strategy: Let nature take its course.

“In order to have a nature recovery it cannot exist in hotspots, it has to exist everywhere.”

Rewilding allows natural processes to mend damaged ecosystems and rehabilitate degraded landscapes. Some efforts aim to connect existing pockets of natural spaces, as in the Jaguar Corridor Initiative of South America. Some reintroduce native species, like wolves in Yellowstone, or the American Chestnut Foundation’s efforts to reintroduce chestnut trees (modified to resist the blight that nearly drove them extinct).

The emphasis in rewilding is on stepping back instead of managing natural resources with their value to people in mind.

The project: Three farmers, Hugh Somerleyton, Argus Hardy, and Olly Birkbeck, started the initiative. Concerned by climate change and the rapid loss of biodiversity, and motivated by the simple delight of seeing animals thrive in the English countryside, they launched the Wild East campaign last summer.

“We in the east want to do it together and not wait for the government.”

They began recruiting participants to pledge a fifth of their land to wildlife. Since then, they have received 1,000 pledges from landowners.

Somerleyton is contributing 400-hectares of his 2,000-hectare property. His fenced-in plot will have free-roaming black pigs and Exmoor ponies in a wood pasture, restored grassland, and heathland.

The strategy: Many rewilding efforts focus on one large plot of land. But Wild East is different. They plan to build up biodiversity by focusing on small pockets of land.

“In order to have a nature recovery it cannot exist in hotspots, it has to exist everywhere,” Somerleyton told Positive News last summer. “We want to focus on a little nature everywhere rather than a lot of nature in one area.”

Of the 1,000 pledges, eighty-two were farmers who pledged to rewild a portion of their land. But pledges came from all types of people. One pledge came from journalist Daisy Greenwell, who decided to let nature “run riot” on her 45-acre Suffolk home property, reports Positive News.

​​”There is something beautifully simple in the relinquishing of control to nature, of trusting that nature knows best, that it will rebound with astonishing speed if only we let it,” she said. 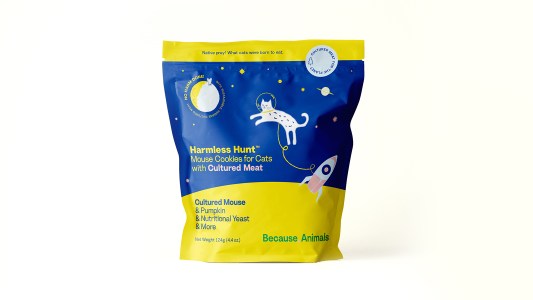 Biotech startup Because, Animals is creating cultured meat for pets, using mouse cells to grow the meat found in its new cat treat.

Food
Cultured meat for pets is about to hit store shelves
By Kristin Houser
Subscribe to Freethink for more great stories
Subscription Center
Sections
Video
Freethink
Subscribe
We focus on solutions: the smartest people, the biggest ideas, and the most ground breaking technology shaping our future.
Subscribe