Solar canals: What if, instead of letting the sun dry up canals in drought-prone California, we covered them with solar panels?

It may sound weird — but solar panels and canals seem to make a brilliant combination. Instead of allowing the sun to evaporate the water in canals, solar panels can shade the precious liquid, while also capturing the sun’s energy.

“Droughts are part of our history and part of our future,” Michael Kiparsky, director of the Wheeler Water Institute at the UC Berkeley School of Law, told WIRED. “It’s just that under climate change, they’re projected to become both more frequent and more severe.”

Cable trusses could be used to position solar panels over the canals. Pilot studies of small-scale “solar canals” in India have found additional benefits, besides shading the water to reduce evaporation, like protecting water from pollution and reducing aquatic weeds, reports Anthropocene.

But would a large-scale effort to convert California’s Central Valley to solar canals be worth it? Researchers at the University of California did the math. They analyzed the effects of solar panels when applied to California’s network of irrigation canals.

They looked at eight locations in the Central Valley, considering sunlight, local electricity costs, and evaporation rates. They estimated that covering all of the 4,000 miles of canals would produce about 13 gigawatts of electricity — half of the state’s goal for 2030 for non-carbon energy sources.

The solar canals would also save 63 billion gallons of water from evaporation yearly (a vast amount, but equal to about 0.6% of the state’s average agricultural water use).

According to the UC researchers, all things considered, the financial benefits of shading the canals were greater than the costs associated with building the cable-support structures needed to support the panels. They published their work in the journal Nature Sustainability.

Solar power already plays a crucial role in helping California meet its sustainability goals. In 2019, the Solar Energy Industries Association (SEIA) reported that solar power makes up 20% of all the state’s electricity. But the study authors say that the space over canals is untapped real estate.

“We need solar energy all over the state to achieve our goal of decarbonizing our economy,” co-author Roger Bales, an engineer at UC Merced, told The Modesto Bee.

The cooling effect from the water would also increase the solar panels’ efficiency.

“Solar covering over canals is an attractive, multi-benefit option for helping make the transition to renewable energy,” Bales told Anthropocene. “It has been demonstrated as feasible, and the next steps are prototype projects plus more-detailed engineering assessments and planning across the thousands of miles of canals in California and the Western U.S.” 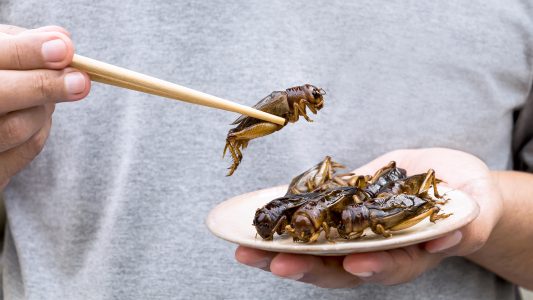 Edible insects could more than make up for the world’s protein deficiency while cleaning up waste and using fewer resources. But we don’t have to eat them. We can use them in animal feed instead.

Food
We don’t have to eat insects. But feeding them to animals could save the planet
By Teresa Carey
Subscribe to Freethink for more great stories
Subscription Center
Sections
Video
Freethink
Subscribe
We focus on solutions: the smartest people, the biggest ideas, and the most ground breaking technology shaping our future.
Subscribe