Carbon-capture technology (the process of removing carbon dioxide from the atmosphere) is being reinvigorated as a possible solution to climate change, thanks to recent technical and economic breakthroughs.

The Canadian firm Carbon Engineering says it has reduced the cost of sucking carbon out of the air from $600 per ton (the last estimate in 2011) to as little as $94 per ton, a roughly 85% decrease in cost.

Unlike previous estimates, which were mostly guesswork, their data comes from a real facility that has been operating for three years, and price quotes from actual suppliers.

To their credit, the company’s calculations and designs were published in an open-access, peer-reviewed article, allowing scientists, critics, and competitors to check their work.

If the costs continue to decline, this tech could alter a fundamental variable in the greenhouse equation, offering a way to take CO2 out of the air, rather than merely slow the rate at which we put it in.

The Circle of Carbon: The technology is called “direct air capture,” which is exactly what it sounds like. Giant fans blow air across a chemical compound that absorbs carbon dioxide.

This liquid is then turned into hard pellets of calcium carbonate (not to be confused with the Han Solo-trapping carbonite), which are then heated in an oven to extract pure CO2. The purified CO2 can be buried underground or used to make new fuel.

The coolest aspect of the technology is that it means, theoretically, we aren’t stuck with the CO2 we’ve pumped into the air for the last couple hundred years, and we have a way to deal with sources of carbon that can’t be cheaply avoided or replaced with low-carbon tech.

The Cost: This concept was studied by the American Physical Society in 2011, which estimated an astronomical cost of $600 per ton of carbon. By comparison, a permit for a ton of carbon in the E.U.’s cap-and-trade system sells for about $19 right now.

Depending on how much you discount future costs from atmospheric warming, and how high those costs are, the U.S. EPA estimates that the social cost of a ton of CO2 pollution is between $12-62 a ton right now.

So, under most warming scenarios, direct air capture doesn’t make economic sense yet, but this is a dramatic step forward.

If the costs of CO2 continue to rise through this century, as the EPA predicts, and if the costs of removing it continue to fall, there’s a point at which it will make sense. (And, because world GDP is expected to double in the next 25 years, hopefully the cost will be easier to bear.)

Recycling Carbon: At the moment, it would be prohibitively expensive to make fuel through direct air capture.

But if we were already taking carbon out of the air anyway at an affordable rate, it could be economical to recycle it into clean, highly efficient fuel.

Carbon Engineering plans to combine its pure CO2 with hydrogen to create new, non-fossil hydrocarbon fuels, including jet fuel and gasoline, which they claim can be done at a cost of about $3.70 a gallon.

If they succeed, the income from making clean fuels will help bring down the overall cost of their extraction facilities, which Carbon Engineering expects to pull out a million tons of CO2 each year.

The Upshot: Fossil fuels are incredibly useful: they’re cheap, abundant, and easily portable sources of energy. They’re hard to replace and hard to give up.

But burning them contributes to a warming planet. The hope offered by carbon capture is that we won’t have to retool the entire global economy—and find a replacement for every source of carbon—to mitigate climate change.

Being able to pull carbon out of the air (at price less than or equal to the cost of avoiding putting it in) gives us a much wider range of options for dealing with emissions and meeting the challenges of a warming planet. 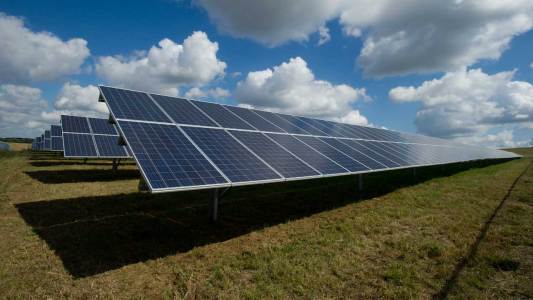 Reliable power straight from the sun looks more achievable than ever.