A newly created paint reflects up to 98.1% of sunlight, making it the whitest white paint ever invented — and potentially a new weapon in the fight against global warming.

“If you were to use this paint to cover a roof area of about 1,000 square feet, we estimate that you could get a cooling power of 10 kilowatts,” Purdue University researcher Xiulin Ruan said in a press release.

“That’s more powerful than the central air conditioners used by most houses.”

The challenge: The world is currently stuck in a dangerous cycle. As the planet gets warmer, people are increasing their use of air conditioners — and because most of those systems are powered by electricity from fossil fuels, their use contributes to global warming.

Besides that, air conditioning ain’t cheap (just ask your dad).

Cool roof, cool house: When sunlight hits an object, some of the light and heat is absorbed and some is reflected — the amount tends to depend on the object’s color, with lighter shades being more reflective than darker ones.

White is the most reflective color, and people have been painting their roofs with white paint to cut home cooling costs for years.

The Purdue researchers wanted to see just how reflective they could make a white paint, potentially easing the burden on air conditioners even more.

How they did it: After analyzing a variety of commercial products, they discovered that barium sulfate, a chemical compound used in photo paper and cosmetics, can make objects really reflective, so they decided to use that as the pigment for the whitest white paint.

To maximize the paint’s reflectiveness, they used a high concentration of the compound — about 60% — and varied the size of its particles.

“A high concentration of particles that are also different sizes gives the paint the broadest spectral scattering, which contributes to the highest reflectance,” researcher Joseph Peoples said.

We think this paint will be made widely available to the market, in one or two years.

The gray areas: The paint’s long term durability still needs to be tested, as does the impact of dirt and other environmental factors on its reflectiveness.

Andrew Parnell, who researches sustainable coatings at the University of Sheffield, also pointed out to the Guardian that someone needs to compare the benefits of the whitest white paint with the environmental cost of mining barium sulphate.

“The principle is very exciting and the science (in the new study) is good,” he said. “But I think there might be logistical problems that are not trivial. How many million tonnes (of barium sulphate) would you need?”

The next steps: The whitest white paint could be produced using commercial methods, according to the researchers, and would cost about the same as other paints. They’ve filed a patent for the paint and are now in talks with a large corporation about manufacturing it.

“We think this paint will be made widely available to the market, in one or two years, I hope, if we do it quickly,” Ruan told the Guardian. 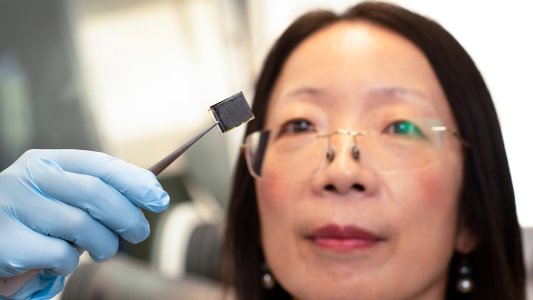 Perovskite solar cells featuring a layer of carbon nanodots made from human hair were more efficient and stable than those without the dots.