Using human hair collected from barbershops, Australian researchers have boosted the performance of perovskite solar cells, bringing them one step closer to commercialization.

Perovskite solar cells: Solar cells convert solar energy into electricity, and while there are many ways to do this, most solar panels contain cells made of monocrystalline silicon — these cells are cut from a single, pure crystal of the element silicon, and they’re both highly efficient and stable.

Perovskite solar cells are a promising alternative to silicon cells. They’re just as efficient and can be produced from a low-cost synthetic material — no need for mining.

They’re also light and flexible, unlike silicon cells, which could make them useful for different applications, such as solar-powered tents or anywhere you need a bendable solar cell.

The challenge: Perovskite solar cells degrade quickly when exposed to water, UV light, and oxygen. Obviously, that makes them pretty useless as solar panels, where they’d be constantly exposed to the elements. It also makes them difficult to manufacture in large quantities.

“Currently, all the reported high-performance perovskite solar cells have been made in a controlled environment with extremely low level of moisture and oxygen, with a very small cell area which are practically unfeasible for commercialisation,” researcher Hongxia Wang said in a press release.

Connecting the dots: Carbon nanodots are particles of carbon with a diameter less than 10 nanometers.

They’re easy to produce, and boast many properties that have made them attractive for a variety of applications (in 2020, some of the researchers involved in this new study even turned carbon nanodots into flexible OLED displays).

The Australian scientists knew other nanostructured carbon materials could improve the performance of solar cells, so they were curious as to whether carbon nanodots could help overcome the limitations of perovskite solar cells.

They collected human hair — which contains carbon — from a barbershop. After breaking it down, they burned the hair at 240 degrees Celsius (let’s not imagine what that smelled like). They then incorporated a nanodot solution into the production process for their solar cells.

The verdict: Compared to standard perovskite solar cells, the ones with the carbon nanodots were more efficient and stable, according to the researchers’ study.

“(The solution) creates a kind of protective layer, a kind of armor,” Wang said. “It protects the perovskite material from moisture or other environmental factors, which can cause damage to the materials.”

The rain cloud: Wang said the goal is to develop perovskite solar cells that could remain stable for at least two decades and be manufactured on a large scale.

A lot more work is needed to reach that goal, but based on this study, carbon nanodots could be an affordable, accessible part of the solution — and a use for hair that would otherwise go to waste. 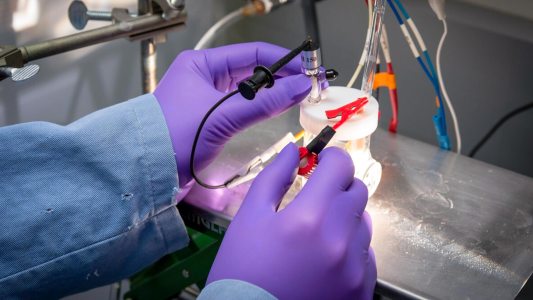 An artificial photosynthesis device that gets more efficient with time could finally allow us to harness solar energy for uses beyond electricity.