A transparent window coating, designed with the help of quantum computing and AI, radiates heat away from windows and into the atmosphere — and it could not only help cool our buildings, but our planet, too.

Hot stuff: Air conditioning is responsible for about 4% of greenhouse gas emissions, and as the world gets hotter, population increases, and global incomes rise, the number of AC units in use is expected to soar from under 2 billion today to 5.6 billion by 2050.

This not only contributes to more global greenhouse emissions, AC units also cause local warming in cities — the “urban heat island” effect.

Reducing our use of air conditioning could decrease the rate of warming, but that would cause problems beyond a sweaty population — on hot days, AC has been shown to increase learning in schools and productivity at work, and on really hot days, it saves lives.

Clear coat: Sunlight includes ​​infrared, visible, and ultraviolet light. When it streams through windows, it’s the ultraviolet and near-infrared wavelengths that do most of the warming in a room, so a window coating that blocks those wavelengths could minimize our need for AC.

The challenge, though, is designing a coating that blocks as much of those wavelengths as possible while also letting visible light through and allowing us to see outside — if those things weren’t important, we could just cover all our windows with aluminum foil.

What’s new? Researchers from the University of Notre Dame and Kyung Hee University have now developed a transparent window coating that could lower the temperature inside a building without using any electricity and without tinting or blocking our view of the world outside.

In hot, dry cities, they estimate it could reduce energy consumption for cooling by 31% compared to regular windows, and while AC units simply move heat outside, contributing to local warming, this coating reflects it back through the atmosphere, which would help cool the planet.

The process: To find a material that could meet their goals, the researchers first made models consisting of alternating layers of four common materials, including silica and titanium dioxide, sandwiched between a glass base and a polymer film.

The quantum computer allowed them to simulate all possible combinations in a fraction of a second.

The next step was finding the optimal arrangement layers, and for that, they used a combination of machine learning and quantum computing processes.

This approach allowed them to simulate all possible combinations in a fraction of a second — far faster than if they’d relied on conventional computing. In testing, the resulting coating outperformed several transparent radiative coolers designed using conventional methods.

The quantum computing-based technique could be applied to the development of other materials in the future, too, according to the researchers.

Looking ahead: It’s not clear whether this transparent window coating will ever make it out of the lab. According to the researchers’ paper, it could be fabricated for practical applications using “state-of-the-art deposition techniques,” but “state-of-the-art” usually means “expensive.”

If the coating — or one like it — can be produced cheaply enough, though, it could help cut cooling costs in buildings and potentially even be tweaked for use on vehicle windows, minimizing our need for air conditioning in cars, aircraft, and more.

If not, we still have other options for cooling our interiors while cutting emissions, such as wind catchers, sustainable ACs, and the world’s whitest white paint. 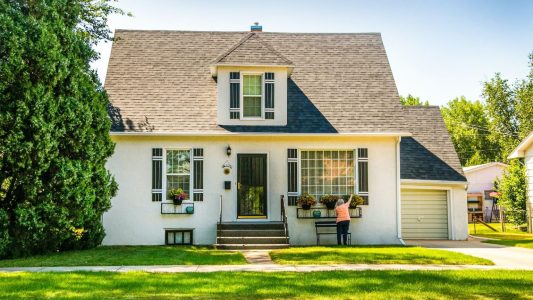 Rechargeable cement batteries could allow for whole sections of multi-storey buildings to be made of functional concrete.

Clean Energy
Your house could become a rechargeable cement battery. Here’s how.
Subscribe to Freethink for more great stories
Subscription Center
Sections
Video
Freethink
Subscribe
We focus on solutions: the smartest people, the biggest ideas, and the most ground breaking technology shaping our future.
Subscribe