A rechargeable cement battery that’s becoming a realistic possibility could change the way you store energy, turning the walls of your house into a giant battery.

Researchers at Chalmers University of Technology in Sweden developed cement batteries that can store around 10 times more energy than previously developed structures, even though at the moment they are still hundreds of times less energy-dense than a lithium-ion battery.

To make the structure, a cement-based mixture with small amounts of short carbon fibres inside is embedded with a metal-coated carbon fibre mesh: iron for the anode and nickel for the cathode, according to a research team led by Dr Emma Zhang.

“Results from earlier studies investigating concrete battery technology showed very low performance, so we realized we had to think out of the box, to come up with another way to produce the electrode,” Zhang says in Science Daily. “This particular idea that we have developed – which is also rechargeable – has never been explored before. Now we have proof of concept at lab scale.”

The role of batteries in a low-carbon economy

Energy storage and the related technology is taking on increasing importance as the world transitions to green energy, renewables and a low-carbon economy.

Storage technology has a core role to play in meeting emissions reduction targets, as it can help transmit and distribute electricity and store energy from renewable sources like solar and wind power. Batteries can help compensate for times when the sun is not shining or the wind is not blowing.

And the development of concrete batteries forms part of the wider conversation about how to develop improved and high-performance batteries.

The role played by batteries and their technology in the move to net zero is being explored by the World Economic Forum’s Global Battery Alliance (GBA). The issue is far from straightforward and investment and technological developments are needed if batteries are to become a core part of the future. On the one hand, batteries offer a great way to store renewable energy, while on the other, they rely on scarce mineral resources for their production and can be hard to dispose of in an environmentally friendly way.

GBA is exploring how to achieve a circular and responsible battery value chain, which it sees as one of the major drivers to realize the Paris climate goals in the transport and power sectors. It says that by 2030, batteries could enable 30% of the required reductions in carbon emissions in the transport and power sectors; however, to achieve this, the battery value chain will have to expand by 19 times over the next decade.

Battery storage is also a focus area for UpLink, the World Economic Forum’s platform to source and elevate innovations to tackle some of the world’s biggest challenges.

The concrete industry also has some way to go to improve its sustainability credentials – with an article in The Guardian claiming that if the cement industry were a country, it would be the third largest carbon dioxide emitter in the world, behind China and the US.

Even so, turning houses into batteries could be part of a wider solution to lower emissions, with functional materials in demand. And while the concept is still at an early stage, the Chalmers University researchers are confident of their breakthrough.

“We have a vision that in the future this technology could allow for whole sections of multi-storey buildings made of functional concrete,” says Zhang. “Considering that any concrete surface could have a layer of this electrode embedded, we are talking about enormous volumes of functional concrete.” 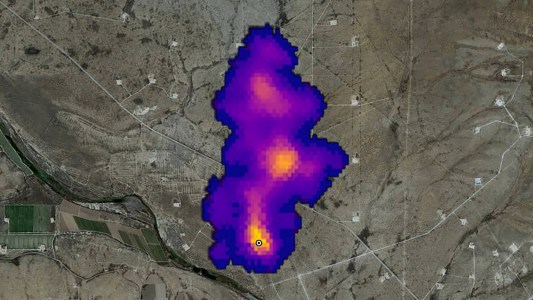 A new instrument aboard the International Space Station has been used to identify more than 50 “super-emitters” of methane.