A new instrument aboard the International Space Station (ISS) has been used to identify more than 50 “super-emitters” of methane — a major step toward slashing global warming.

The challenge: To combat global warming, we need to cut our greenhouse gas emissions. Carbon dioxide accounts for the majority of those emissions, and transitioning from fossil fuels to clean energy will significantly reduce those.

Methane is produced by everything from landfills and wetlands to cows and coal mines.

Methane is a much less common greenhouse gas than CO2, but it’s far more potent, with each ton emitted causing 80 times as much warming in the 20 years after its release.

Accounting for its higher potency, methane is responsible for about 20% of greenhouse emissions. While CO2 lingers in the atmosphere for centuries, though, methane leaves in about a decade.

That potency and short lifespan means slashing methane emissions could have a swift, significant impact on warming — but because methane is produced by everything from landfills and wetlands to cows and coal mines, cutting back isn’t so straightforward as switching from coal power to solar.

Mapping methane: When the “Earth Surface Mineral Dust Source Investigation” (EMIT) instrument arrived at the ISS in July 2022, NASA’s plan was to use it to detect and map dust blown into the atmosphere from Earth’s deserts.

But it turns out EMIT can detect and map methane, too.

In just the few months it’s been spaceborne, EMIT has allowed NASA to identify more than 50 locations emitting methane at a high rate — these “super-emitters” range from a landfill in Iran to an oil field in New Mexico.

“Some of the [methane] plumes EMIT detected are among the largest ever seen — unlike anything that has ever been observed from space,” said Andrew Thorpe, a research technologist at JPL. “What we’ve found in just a short time already exceeds our expectations.”

“As it continues to survey the planet, EMIT will observe places in which no one thought to look for greenhouse-gas emitters before, and it will find plumes that no one expects,” added Robert Green, EMIT’s principal investigator at JPL.

The big picture: Some of the methane plumes detected by EMIT were previously undiscovered, and now that NASA knows about them, it’ll be able to incorporate them into its climate research.

“We have been eager to see how EMIT’s mineral data will improve climate modeling,” said Kate Calvin, NASA’s chief scientist and senior climate advisor. “This additional methane-detecting capability offers a remarkable opportunity to measure and monitor greenhouse gases that contribute to climate change.”

Perhaps more importantly, now that we know about these major sources of methane emissions, we can take steps to try to eliminate or minimize them — helping combat the warming that’s driving climate change. 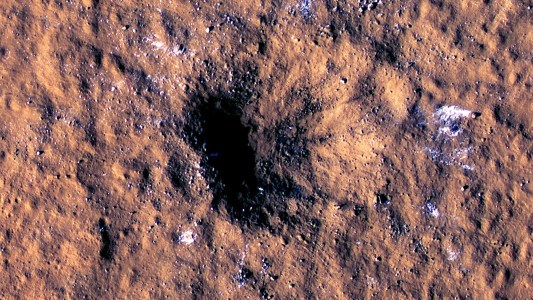 A meteorite impact that caused a marsquake and created a massive new Mars crater could shape our plans to send people to the Red Planet.