A recent meteorite impact on Mars was so powerful, it could be felt by a NASA lander thousands of miles away — and the new Mars crater it created could affect our plans to send people to the Red Planet.

The surface level: On December 24, 2021, NASA’s aging InSight lander detected seismic waves on Mars. That wasn’t unusual — the lander has detected more than 1,300 marsquakes before — but what was remarkable was the type of waves it detected.

“This is the first-time seismic surface waves have been observed on a planet other than Earth.”

Instead of “body waves” that emanate from deep underground, these were “surface waves” that had traveled along the rocks at Mars’ surface. NASA had been hoping for years to detect these waves with InSight to improve its understanding of Mars’ crust.

“This is the first-time seismic surface waves have been observed on a planet other than Earth,” said Doyeon Kim, lead author of a paper on the marsquake. “Not even the Apollo missions to the moon managed it.”

Going deeper: Fast forward to February 11, 2022, when a team at Malin Space Science Systems (MSSS) noticed a new Mars crater in images from another spacecraft, the Mars Reconnaissance Orbiter.

Based on higher-resolution images of the crater, researchers determined that it’s about 490 feet wide and 70 feet deep.

“It was immediately clear that this is the biggest new crater we’ve ever seen … even though meteorites are hitting the planet all the time, this crater is more than 10 times larger than the typical new craters we see forming on Mars,” said Ingrid Daubar, leader of InSight’s Impact Science Working Group.

The impact that made the crater was powerful enough to send material flying 23 miles away — and to dislodge large blocks of water ice from below the Martian surface.

NASA had never spotted water ice that close to the Martian equator before, and the discovery is a boon for future human exploration missions — Martian astronauts will need a source of water, and the climate near the equator is less hostile than near Mars’ polar ice caps.

Tying it all together: To narrow down the date of the impact, Posiolova’s team started looking at older images of the crater site and discovered that it first appeared on December 25, 2021. That’s when Posiolova remembered that InSight had detected a major quake on December 24.

The site of the new Mars crater matched up with the predicted epicenter of the quake, confirming that the meteorite impact had caused it. That means NASA managed to snag visual and audio data on the record-breaking event.

“We thought a crater this size might form somewhere on the planet once every few decades, maybe once a generation,” said Daubar. “So it was very exciting to be able to witness this event, and to be lucky enough that it happened while InSight was recording seismic data — that was a real scientific gift.”

Saying goodbye: The discovery was particularly fortuitous given that NASA is only operating InSight’s seismometer one out of every four days.

“For the last four years, the lander has been collecting a lot of dust on its solar panels,” said Bruce Barnerdt, the Insight mission’s principal investigator. “We’ve been sort of cutting back on the operations of the spacecraft as that’s happened in order to squeeze out as much science data as we can.”

NASA expects InSight to completely run out of energy in the next six to eight weeks — but thanks to the new impact-caused marsquake, the lander is going out with a bang. 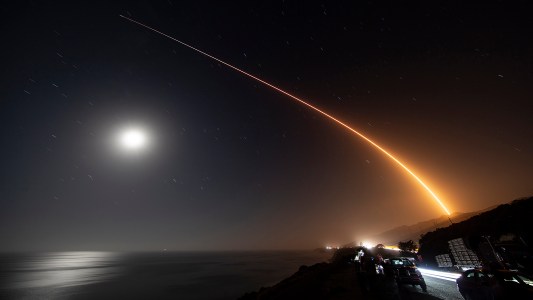 SpaceX’s Starlink satellite mega-constellation could be used to create a new, more secure global positioning system for the US Army.

Aerospace
Starlink satellites can be reverse-engineered to create new GPS
Subscribe to Freethink for more great stories
Subscription Center
Sections
Video
Freethink
Subscribe
We focus on solutions: the smartest people, the biggest ideas, and the most ground breaking technology shaping our future.
Subscribe