Carbon dioxide is taking all the blame for climate change, yet we can’t ignore methane emissions, which are responsible for at least 25% of today’s human-made global warming.

Even though there is much more carbon dioxide being emitted than methane, methane is much more potent. So reducing methane could have a significant impact. If we can stop methane emissions, then maybe we have a fighting chance at halting climate change.

Recently, it became a whole lot easier to find methane leaks, thanks to researchers using methane-hunting satellites to sniff out the potent greenhouse gas.

The problem: When we talk about climate change, carbon dioxide rules the conversation. But methane emissions (primarily produced by the energy industry, including oil, natural gas, and coal) comes in second when it comes to the greenhouse effect.

Unlike carbon dioxide, which stays in the atmosphere for a lot longer, methane is short-lived. Yet, it is a significantly more potent greenhouse gas — the EPA estimates that the warming effect of methane is 25 times stronger than CO2, pound for pound.

Drew Shindell, a professor of Earth Science at Duke University, thinks that CO2 is the most crucial target in the battle against climate change, but decreasing methane will have a faster impact.

“So many aspects of climate change are happening faster than expected,” he told the BBC. “We see more fires, more of the strongest hurricanes, more heatwaves, and methane is the best lever we have to reduce the growth in those over the next 30 years.”

Kayrros, an energy analytics company, has launched Methane Watch, tapping satellites to be their eyes around the planet. Methane Watch is a monitoring platform that combines sophisticated algorithms to enhance satellite data to measure the methane footprint of regions, nations, and companies.

Earlier this month, Kayrros’ Methane Watch identified a gigantic methane plume over Russia. The methane leak occurred when part of a Gazprom pipeline shut down due to emergency repairs, reports Bloomberg.

While many satellites don’t have the resolution to pinpoint the location of a methane leak, technology is improving rapidly, and there is a growing fleet of satellites up to the task. They include MethaneSAT, a subsidiary of the Environmental Defense Fund that can spot methane emissions from oil and gas activities virtually anywhere on the planet, and Carbon Mapper, which also pinpoints the source of methane leaks.

We can see it, now what? Over half of the 380 million metric tons of methane emitted yearly by human activities may be reduced this decade using current and generally cost-effective techniques, reports Yale e360.

Simple things like fixing leaky pipelines, stopping deliberate venting of unwanted gas from drilling rigs, or capturing fumes from livestock and rotting landfills could slow warming and buy time to expand on other solutions that sequester carbon. 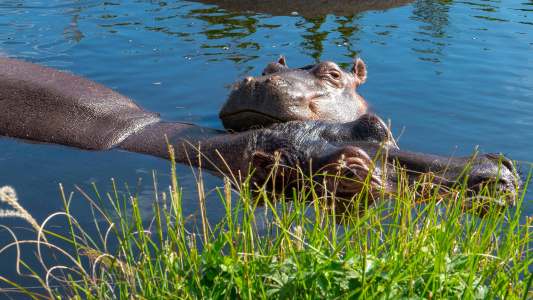 A study into the movement of hippos led to new research on anthrax outbreaks when some of the animals wearing GPS trackers contracted the disease.