In 2017, a group of hippos in Tanzania was suddenly struck by anthrax — a rare, deadly disease that is almost impossible to study in the wild.

Quick-thinking scientists, who were following the animals with GPS, immediately launched a study to uncover how this bizarre anthrax outbreak happened — and how future outbreaks could be predicted and prevented.

Anthrax outbreaks: Anthrax is an infectious disease caused by a bacteria found naturally in soil. While it can infect people, the victims are usually animals, and they become infected after breathing in the bacteria’s spores or ingesting contaminated plants or water.

It’s rare for one animal to catch anthrax from another, but scavengers and carnivores can contract it if they eat the body of an infected animal. An infected animal’s carcass can also release spores into the environment, which can then be inhaled or ingested by other animals.

The challenge: Anthrax outbreaks amongst animals can lead to human infections if the tainted meat is butchered and eaten. Understanding how animal outbreaks spread could help avoid such scenarios, but that data is almost impossible to collect.

“We can’t predict when an anthrax outbreak will occur, so it’s impossible to plan such a study,” Wendy Turner of the U.S. Geological Survey and the University of Wisconsin-Madison said in a press release.

The discovery: In 2017, UC Santa Barbara researchers had such a study fall right into their laps.

The year prior, they’d attached GPS collars to 10 hippos in Tanzania so they could track the animals’ movements in response to decreased water flow in the area’s rivers.

When one of the trackers stopped showing signs of movement, ecologist Keenan Stears assumed it had fallen off the hippo, so he hiked to retrieve the collar.

The drying of rivers is one of the major reasons why these outbreaks have gotten so bad.

When he got to the location, he found that the tracker was still attached to the hippo, but the animal was dead in a pool of water — with about six other hippo carcasses.

“I have been studying anthrax for years in Namibia, with many more GPS-collared hosts monitored than the 10 in this study,” Turner said, “and I still haven’t had any of our individuals succumb to the disease.”

The study: When Stears’ team realized it had stumbled upon an active anthrax outbreak amongst tracker-equipped hippos, it connected with Turner and other disease ecologists to see what they could learn from the data.

Together, they took daily counts of living and dead animals in the area’s pools. They also took samples from the pools to look for anthrax spores, using their data to determine the rate and direction of the outbreak’s spread.

The insights: Hippos can travel more than four miles in search of water in a single night, and based on the new data, it appears an anthrax infection doesn’t thwart that movement — infected animals would roam just as readily as healthy hippos, before succumbing to the disease.

“This has important implications for how far a single individual could potentially vector the disease before its death and create new infectious reservoirs,” Stears said.

Hippos can be considered the canary in the coal mine.

The data also revealed that hippos were spending time in the same pools as the carcasses of infected animals — something they wouldn’t normally do.

“The drying of rivers is one of the major reasons why these outbreaks have gotten so bad over the years,” Stears explained. “As the river dries, hippos are forced to congregate in the remaining river pools.”

The next steps: The researchers hope that their study will help disease ecologists predict how future environmental changes might affect the severity and spread of anthrax outbreaks among animals.

Those predictions, in turn, might help them prevent outbreaks from making the jump to other species — including people.

“Hippos can be considered the canary in the coal mine,” co-author Melissa Schmitt from UC Santa Barbara said. “Their sensitivity to adverse conditions makes them a good indicator of how global change may influence disease dynamics and overall wildlife health.” 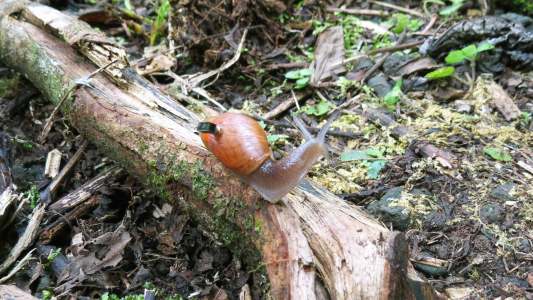 The world’s smallest computer was used to figure out why one species of snail survived a situation that pushed more than 50 others into extinction.