Using the world’s smallest computer, University of Michigan (UM) researchers were able to figure out why one species of snail was able to survive a situation that pushed more than 50 others into extinction.

“We were able to get data that nobody had been able to obtain,” researcher David Blaauw said in a press release. “And that’s because we had a tiny computing system that was small enough to stick on a snail.”

Unintended consequences: In 1974, scientists introduced the rosy wolf snail to the Society Islands, home to Tahiti, in the hopes it would help control the population of giant African land snails, which had become a major pest.

But the rosy wolf snail was a bit too effective of a predator — to date, it has wiped out 56 of the islands’ 61 known species of snail.

The challenge: Partula hyalina is one of the lone survivors, and researchers have wondered how the species was able to escape the rosy wolf’s sights.

In 2015, UM researchers Diarmaid Ó Foighil and Cindy Bick hypothesized that the snail’s white shell might have helped it survive in parts of the forest with more sunlight — the kinds of places where radiation would kill the darker-shelled rosy wolf.

However, to test the theory, they needed to measure and compare the daily sun exposure of P. hyalina and rosy wolf snails, and they weren’t sure how to do that.

Tiny tech: Eventually, Bick got word that another team of researchers at UM had developed the world’s smallest computer, a 2x5x2 millimeter sensor called the Michigan Micro Mote (M3).

She reached out to the M3 team, which had just added tiny solar cells to the computer to charge its battery. They realized that by measuring the speed at which the battery charged, they could keep track of the amount of sunlight hitting the computer at any given time.

Snails on site: After first testing the computer on local snails, the UM team sent 50 of the devices to Tahiti in 2017.

With the help of local snail expert Trevor Coote, they glued some of the computers onto the shells of rosy wolf snails. They couldn’t do the same for P. hyalina because it’s a protected species, so they placed computers on the leaves where they found those snails resting during the day.

From this, they discovered that P. hyalina was exposed to 10 times the amount of sunlight at noon as the rosy wolf. Even if the predator attacked at night, it wouldn’t have enough time to reach P. hyalina’s habitat and get back to the shade before it got too hot — it moves at a snail’s pace, after all.

Looking ahead: This marked the first field application for the world’s smallest computer, but a second one tracking monarch butterflies is already underway. The hope is that the tech will not only make it possible for researchers to track tiny animals, but also help them.

“If we are able to map and protect these habitats through appropriate conservation measures, we can figure out ways to ensure the survival of the species,” Bick said. 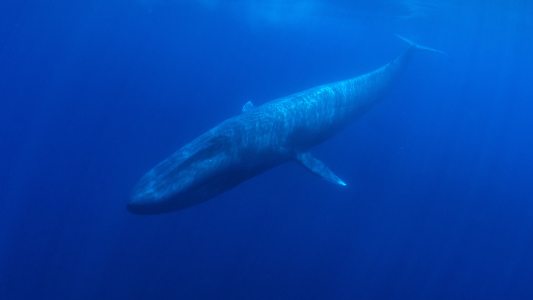 Underwater microphones used to listen for signs of nuclear bomb testing have captured the singing of a population of rare pygmy blue whales.