Fans are crowding back into the stands of the English Premier League, the most-watched football league in the world, and the reigning champs, Manchester City, are championing a new mission — reducing landfill waste by providing edible coffee and (of course) teacups at their 55,000-seat Etihad Stadium. Coffee aficionados can eat the cup after they finish their morning joe, or they can nibble away at the cup, like an ice cream cone, as they drink.

An announcement on the Man City club website said: “For the first time on campus, an ‘edible coffee cup’ will also be introduced. This fantastic and innovative solution provides an amazing solution to waste, just eat your cup!”

The backstory: We’ve all heard of edible bread bowls or waffle cones. But edible tableware is a new trend that hasn’t entirely taken off. In 2016, Bakey’s launched the first edible cutlery. Not long after, the company went out of business due to bank fraud. That same year, a women-led company pitched LOLIWARE on Shark Tank and landed a great deal. But they’ve been off the market for some time.

“Fans will have the option to put these cups into our composting waste stream, if preferred.”

Does the newest round of edible kitchenware have more promise? CuPFFEE, an edible wafer cup, became available at cafes across Ireland earlier this summer. And now BioBite, a Scotland-based company, is getting a sports endorsement from Manchester City for its new twist on edible receptacles.

BioBite’s cups, which look remarkably similar to CuPFFEE’s, were launched two years ago by University of Aberdeen students Samuel Hvizd and Lyubomir Lambrev. Their goal is to offer a “tasty, crunchy, and a fully organic alternative to all disposable cups,” they told Fast Company.

You can find the cups at several restaurants, bakeries, and chocolatiers in the United Kingdom, and the Etihad Stadium. In addition to coffee, they can hold soups and cold foods like yogurt and ice cream.

What the cup? The coffee cup is a wafer-based container that retains its shape when filled with a hot drink like tea, coffee, or — my favorite stadium drink — hot cocoa.

It is made up of all-natural, vegan ingredients, including wheat flour, oat bran, and water. Because they are created with a pressure heat treatment procedure, they can endure high temperatures (up to 185 degrees Fahrenheit). And they don’t contain sugar or have inedible coatings like wax.

The cup remains leak-proof for up to 12 hours, but it is only crispy for 45 minutes at best — exactly one-half of a soccer match.

But don’t nurse this drink too much. Even though the cup remains leak-proof for up to 12 hours, it is only crispy for 45 minutes at best — exactly one-half of a soccer match.

Why this matters: The most important feature of the edible cup is that it will reduce landfill waste, particularly styrofoam or plastic — waste that will stick around practically forever because it can’t decompose.

Now, when fans have finished their hot beverage, they can chow down on the cup and digest it in our belly — humankind’s natural composter.

The edible cups have been launched as part of a variety of new concession-stand options for the next season, many of which will target environmental sustainability — including paper beer cups that are made from recycled paper that can be recycled again, eliminating waste.

Don’t worry if you aren’t feeling hungry for coffee cup, though — Man City club says, “Fans will have the option to put these cups into our composting waste stream, if preferred.” 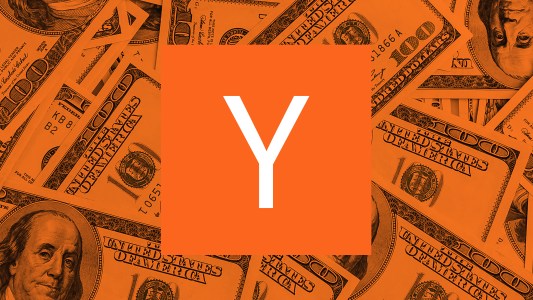 Famed accelerator hopes to make it easier for founders to find each other.