The specter of failure is a constant companion for people who start their own businesses. That’s why every entrepreneur Freethink has profiled talked to us about the prospect of their plans not working out. Considering what we know about entrepreneurial success rates, you’d have to be crazy not to plan for failure.

But sometimes, an idea seems so good that the prospect of it not working out seems unlikely. After talking to a bunch of people whose startups seem to be creeping toward profitability, we wanted to talk to someone whose plan didn’t work at all. How it felt to fail, and what they learned from doing so. So we called up Luke Kenworthy, a former Congressional staffer who got a bright idea in 2012, and tried to make it happen as fast he could.

Mike Riggs: We thought it would be fun to talk to someone who struck out on their own, and then struck out, to see what they learned and how they bounced back.

The only success was learning what not to do.

Luke Kenworthy: I failed, but I wouldn’t say I bounced back. The only success was learning what not to do.

Mike: That’s important! Can you walk us through what it was that you wanted to do and what happened when you tried to do it?

Luke: I’d been working for a member of Congress from Indiana for a couple of years, when I realized that the congressional scene is its own little club, and that there could be some value in providing a networking site exclusively for people who work on the hill or used to work on the hill.

I decided a hill staff-specific social network was valuable, and moved home to Indiana in 2012 to find investment from folks I knew. That ended up being my first big mistake.  I was paranoid that potential investors in D.C. would throw money at someone else to build this site, but investors in Indiana didn’t know the hill, and so it was hard for them to understand the value. I ended up getting most of the money from family and friends.

Mike: So you got your idea and some money to pursue it. What happened next?

Luke: I hired a contractor to build the site. That was mistake number two.

I was so eager to get something built that I didn’t make good decisions in terms of how much I paid upfront. I also didn’t know how to tell if the company could make what I wanted, so I made a lot of assumptions about what they could do and how fast they could do it. The contractor I hired had made great products for high profile clients, so I knew they were capable of making the site. But I was wrong to assume their timing would line up perfectly with mine, and I didn’t know they were in the midst of leadership transition that started their downturn.

These assumptions were wrong, and the timeline ended up conflicting with my revenue plan, which was to charge Congressional offices to join. There were like 80 incoming members of Congress in the beginning of 2013, and my plan was to get them all to subscribe to this service, through which they could hire their staff. Except the company that was building the website wasn’t even close to being finished by the end of 2012.

I headed back to D.C. with no money and no income. I was sleeping on a friend’s couch. I had a dresser in his closet and my laptop and that was it. That’s when I decided to pivot to an ad-based rather than subscription model.

Mike: This sounds like it’s going off the rails.

I lost sight of the main value I was trying to create in an effort to survive.

Luke: Yeah, I lost sight of the main value I was trying to create in an effort to survive. Because the site wasn’t ready, I couldn’t charge new members to join a site that would bring them up to speed. Going ad-based seemed like it would help. From January 2013 through June, I probably went to 300 bars and restaurants asking them to buy ads on a social network for hill staff. But there were a ton of websites that already did that same thing, so it really wasn’t that valuable.

I was just trying to find a way to make this whole thing work.

By May of 2013, the company said they were ready, except the site really didn’t have anything beyond ad capability. It didn’t have a jobs section or a place to upload legislative documents or anything. I relied on this one company to build the site and they couldn’t do it.

Mike: So did you just scrap the entire thing?

Luke: No, because I had 100 people that were testing the site for me before it launched, and a lot of people wanted to see me succeed. We launched, and had almost 200 congressional staffers on the website. That was probably more embarrassing, because it wasn’t what I had envisioned.

I had no money left at this point and I was still living on a couch. That’s when I realized it was over.

Then, in May, the company that built the website told me they were shutting down. I had no money left at this point and I was still living on a couch. That’s when I realized it was over.

Mike: It sounds like you did everything you could to make it work.

But there was just too much to do. I found a normal job and let the site die.

And that’s my story.

Mike: It sounds like you did a couple things wrong initially that made it hard to course correct later on. What’s the biggest thing you wish you’d done differently?

Luke:  I would say the biggest error was definitely not having a source of income while I pursued this. I couldn’t build this and stay in my congressional role, but I should’ve found something else full-time.

I also relied too heavily on assumptions that ended up being wrong. I was dependent on a contractor to build a website in a short period of time, which they couldn’t. That changed everything. A two-year timeline would have been way more sensible.

I also tried to do everything by myself, and I don’t think you can do everything by yourself. You need people who are bought in and personally vested in making it work. They can also keep you realistic and on track. I would say those are the three main lessons.

Mike: When you finally had to pull the plug, were you relieved? Embarrassed? Just ready for the next thing?

Luke: All three of those.

I was embarrassed about how badly it turned out. But I was also relieved when I realized I was going to move on.

It completely changed my life and my perspective. I felt like I couldn’t trust anybody. I was embarrassed about how badly it turned out. But I was also relieved when I realized I was going to move on. There was definitely relief in that.

It’s hard to describe how much you invest in something like this. I slept four or five hours maybe a night, and I was thinking or working all those other hours. I invested everything I had for a little over a year, which was exhausting, and it was hard to let it go.

Mike: I went from high school to college to working for other people, and have only ever worked for other people since then. As a result, being an entrepreneur looks terrifying to me. Having experienced the worst of it and survived, is it less terrifying?

My uncle was one of the first people I approached for investment. He didn’t give it to me because he said most people fail at starting their own businesses. Now, I realize you have to be kind of insane. Like, the successful entrepreneurs I know are all a little bit nuts.

I definitely want to do it again, but it’s still scary as hell.

At the same time, the idea of success, of creating value for somebody and solving a problem no one is solving — that’s really enticing. I definitely want to do it again, but it’s still scary as hell.

Mike: What are you doing now?

Luke: I work for the state of Indiana.

Mike: Do you have an itch to try being an entrepreneur again?

Luke: I actually have been working on a project for the last five months, and it’s startup related. But I’m being more cautious this time. I haven’t pulled the trigger on anything and I don’t know if I will.

My experience taught me that I need to understand as many variables as possible before I get myself into something. To not quit my current job until I actually receive some sort of income from the other, and to make sure that I have the right vision. Because I know what it looks like if I don’t have those things.

Failing
3 times our brightest minds made bad predictions
Some of the predictions might look outlandish now, but at the time they actually seemed quite plausible.
Up Next 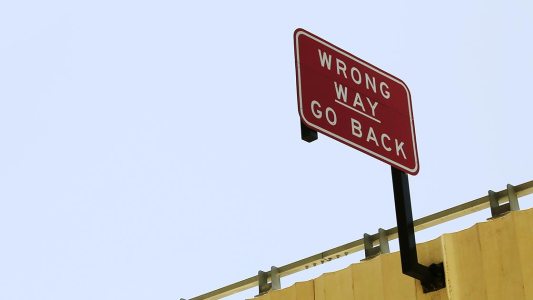 Why learning to suck at something is the only way to get good at it.

Failing
Failure is inevitable, but it doesn't have to ruin your life
By Mike Riggs
Subscribe to Freethink for more great stories
Subscription Center
Sections
Video
Freethink
Subscribe
We focus on solutions: the smartest people, the biggest ideas, and the most ground breaking technology shaping our future.
Subscribe