The first-ever made-to-fade tattoo ink is revolutionizing the tattoo industry.

Ephemeral is a new tattoo shop in Williamsburg, a neighborhood in Brooklyn — just the type of place that doesn’t need another tattoo parlor. The vibe is young and trendy. Street art and outdoor concerts bombard your senses as you stroll between the chic cafes and boutiques. In Williamsburg, tattoos are old hat. But Ephemeral brings a new spin to getting inked.

In March, Ephemeral launched the first-ever made-to-fade tattoo ink, allowing people to get tattoos without committing to them for the rest of their lives.

But Ephemeral’s tats aren’t stick-on designs, like so-called temporary tattoos. The tattoo artists use actual needles to inject tattoo ink into their clients’ skin — just as painfully as a real tattoo. The only difference is, instead of making a lifelong commitment, they use fading tattoo ink, so the designs last between just nine and 15 months.

“While there is a time and place for permanence … there are millions of people who, like (us), wouldn’t engage (with tattooing) because of that,” Ephemeral’s co-founder Josh Sakhai told The New York Post.

Sakhai isn’t a tattoo artist and doesn’t have any tattoos himself. The 24-year-old grew up in Great Neck, Long Island, as a Persian-Jewish boy, and his religion forbids him from getting tattooed.

“Growing up, I was somewhat rebellious. These traditions and values felt like rules and restrictions, that really felt like limitations on how I can be in the world and how I can express myself. And one of the things that I couldn’t do was to get a permanent tattoo. Then when I was out on my own in college, it was time to walk the walk of this rebel I said I was,” he told Nylon.

Even so, as a rebellious college-aged student, he nearly got a tattoo but opted out at the last minute because he was too nervous.

Sakhai isn’t alone. Most people who shy away from tattoos do so because of their everlasting nature. Those who do get tats often regret it. According to a 2016 Harris Poll, almost half of people aged 18 to 35 have tattoos, and nearly one in four regrets it. Another survey found that 78% of people with tattoos regret at least one of their tattoos. And while laser tattoo removal is a growing multi-billion dollar industry, it’s expensive, requires repeated treatments, and often doesn’t work all that well.

So, for those who are toying with the idea of getting inked, Ephemeral offers an option to try one on for size first.

For rebellious Sakhai, some part of him still wanted a tat. So, he began dreaming of a way to get around the permanence.

Sakhai and three of his New York University college buddies — all of whom grew up in traditional immigrant households where tattoos were taboo — spent more than six years making their tattoo ink, going through more than 50 different formulas to find one that faded nicely, reports New York Post.

Ultimately, it was Brennal Pierre and Vandan Shah, who both earned Ph.D.s in Chemical Engineering from NYU, who found the final formula.

“With our background in biomolecular engineering, we’ve worked with protein stability and protein development. Tattoos are just interactions between the skin (the protein in this case) and the ink, so that’s why this problem was of interest to us,” Pierre told Bazaar.

For people who are commitment-phobic but love creative self-expression, Ephemeral has your back.

Now, that is a tattoo I could commit to.

Urban Living
New “risky” playground could make kids anti-fragile
A new playground in Melbourne’s Southbank is the work of artist Mike Hewson, who introduces “risk” back into play.
By Sanné Mestrom

AI
I used generative AI to create pictures of painting robots, but I’m not the artist — humanity is
Generative AI systems are incredible and hugely important, but they are not creative. In fact, they’re not even intelligent.
By Louis Rosenberg
Up Next 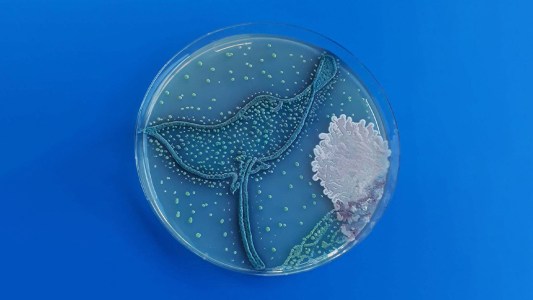