The paradox of entrepreneurship is that you can’t succeed without maximal effort, but you can also give everything you have and still fail. Holding those two realities in your head — “I won’t succeed unless I give it my all,” “Giving it my all doesn’t mean I’ll succeed” — can make you a little crazy. Or maybe you have to be a little crazy to handle that dissonance. I’m not really sure.

But I do know that failing is a very hot topic among people who start companies and the people who invest in them. Is it categorically good to fail? Or is there a difference between good failure and bad failure? Are we fetishizing failure? What are the costs of failing? How do we bounce back after it inevitably happens?

Are we fetishizing failure? What are the costs of failing? How do we bounce back after it inevitably happens?

In This Week In Ideas, we’re taking a tour of the failure literature. Strap in and get your clicking finger ready.

“In the United States, talking about failure is something of a cottage industry,” a New Yorker writer notes in a piece titled, “Fail Fast, Fail Often, Fail Everywhere.”

“The type of failure we’re talking about is like how frogs lay 20,000 eggs so a few wind up as adults sitting on a lily pad sucking down mosquito dinners,” explains a Newsweek scribe. That makes it sound almost like you have to fail. “Wanna create a great product? Fail early, fail fast, fail often,” a FastCo writer advises in a piece about prototyping new products. “Fail by design,” echoes a writer at the Harvard Business Review.

Failing
3 times our brightest minds made bad predictions
Some of the predictions might look outlandish now, but at the time they actually seemed quite plausible.
Up Next 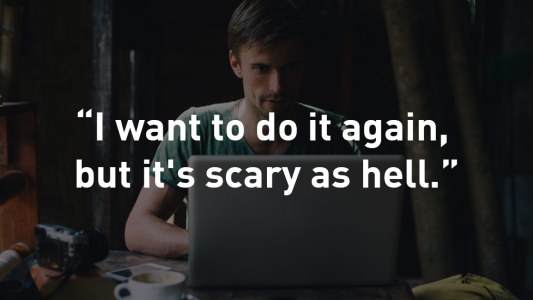 Luke Kenworthy put everything he had into making his business work. But it didn’t pan out. Now he’s sharing what he…

Failing
What can we learn from an entrepreneur whose business failed?
By Mike Riggs
Subscribe to Freethink for more great stories
Subscription Center
Sections
Video
Freethink
Subscribe
We focus on solutions: the smartest people, the biggest ideas, and the most ground breaking technology shaping our future.
Subscribe