Flying across the American Southwest, brilliant points of light shine in the distant wastes of the Mojave Desert. Three glowing spots hover over the horizon, each surrounded by a gleaming field. These are the towers and mirrors (heliostats) of the Ivanpah generating station, one of the largest concentrated solar power plants on Earth. What is this technology that allows solar power to continue at night, and how does it work?

Your solar panels: Traditional photovoltaic (PV) solar cells absorb sunlight and pour out electricity. Particles of light (photons) emitted by the sun travel through space, transit Earth’s atmosphere, and smack into a solar panel. Some photons are reflected away by the panel and lost. Most of them are absorbed by the atoms of the panel, which then release electrons. The solar cell’s electrical design gathers these electrons and channels them out as electrical current. Further electrical devices convert this low voltage direct current (DC) to higher voltage alternating current (AC) to send across power transmission lines.

How this is different: Concentrated solar thermal (CST) power plants do not directly exchange solar photons for electrons. They gather the photons and use them to heat water, which turns a steam turbine, which turns an electrical generator. This is the same way that nuclear fission and fossil fuel plants generate electricity — the difference being that uranium or coal or natural gas are replaced by the heat of the sun’s rays.

The solar concentrator’s basic design is simple. An array of heliostats — a term for mirrors on swiveling mounts capable of tracking the sun — is built on the ground. These arrays cover many hundreds of acres, roughly comparable to a large traditional solar plant of similar capacity. Each mirror is continuously adjusted so that it points in a direction that bisects the angle between the sun and a giant power tower. Sunlight is thus beamed up toward a boiler system looming 400-800 feet above the earth.

Approaching the central tower, the converging solar light from thousands of mirrors becomes extremely powerful. Visible from many miles away, the nearly transparent air itself will shine with scattered optical power. Unlucky birds that intersect the concentrated beams are incinerated mid-air. This dense power is what ultimately drives electrical generation.

When sunlight is not available, this stored up sunlight energy can be pumped out of the tank and used to power a turbine generator for on-demand power overnight.

The top of the tower is a box with black walls — the sides of a boiler designed to absorb nearly all of the reflected light, which contains the fluid to be heated. Some plants, like Ivanpah in California, heat water for their steam turbines. Others use a more exotic molten salt working fluid.

Why it matters: Solar thermal concentration offers one major advantage over traditional PV solar cell technology: dispatchability. A properly configured CST plant can broil molten salt to more than 1000 degrees Fahrenheit, storing an incredible amount of heat energy. The liquid salt is then pumped into a holding tank, acting as a sort of battery. When sunlight is not available (roughly half the time), this stored up sunlight energy can be pumped out of the tank and used to power a turbine generator for on-demand power overnight.

Challenges ahead: Installed CST electricity generation across the globe is relatively low. While the technology works today, and paths to advance it have been laid out, the cost is currently too high to compete with standard photovoltaic cells. Many nations, including Israel, the United Arab Emirates, Morocco, China, Chile, Spain, and India have built giant power tower installations, yet most of their future commitments are unclear. While concentrated solar thermal power has been growing cheaper, PV cell cost has been dropping just as rapidly.

The future of this energy source may well hinge on continued development of its stored energy capability for dispatchable power, which is needed to fill in for inconsistent wind turbines and PV solar plants.

Options today to store energy are very limited. Lithium-ion technology has many downsides that prevent countries from running on batteries. Like the cells in a laptop, they are expensive, they degrade dramatically over time, and they are liable to catch fire. Global production capacity is far too small for the task, and that production is dominated by China.

Concentrated solar thermal technology is straightforward and clean. The design is beautiful and still being improved. Effectively storing sunlight for overnight power dispatch is a brilliant feature. Still, commercial grid electricity is a brutal market in which the cheapest wins. Will solar concentrator plants become competitive and multiply around the world? We shall see.

This article was originally published on our sister-site, Big Think. 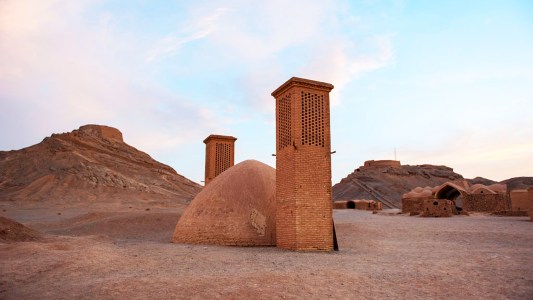 Wind catchers — an ancient technique to beat the heat, could help us once more in our quest for emissions-free cooling.