Preserving food using a technique developed to prevent damage to donor organs could expand the types of foods that can be frozen — and even have a side benefit for the environment.

The challenge: Freezing food is one of the most straightforward ways to extend its life — the process slows the growth of microorganisms you don’t want on your plate, without affecting the food’s nutritional value.

However, conventional freezing requires that food be exposed to air and frozen solid, which can trigger the formation of ice crystals that may decrease food quality after thawing.

Flash freezing can help maintain quality by preventing the formation of large ice crystals, but it’s a more energy-intensive way of preserving food.

The idea: More than 15 years ago, UC Berkeley researchers developed a technique for freezing transplant organs and other biological tissues that would prevent ice crystal formation and improve the integrity of the tissues once thawed.

The technique, called isochoric freezing, is still being researched in the medical field, but UC Berkeley has partnered with the U.S. Department of Agriculture to publish a study detailing how using it for preserving food could cut global energy usage.

How it works: During isochoric freezing, food is placed in a container made of plastic, metal, or another rigid material. The container is then filled with water or another liquid, sealed, and placed in a freezer.

As the temperature drops, the water expands, creating pressure within the container.

“[I]f the pressure cannot break the container and escape, it will continue to build,” the researchers explain. “And as it happens, ice is less likely to form as pressure builds.”

The reduction in carbon emissions would be equivalent to removing a million cars from roads.

The latest: Previous studies have already shown that isochoric freezing can improve the quality of potatoes, tomatoes, and other foods that don’t typically hold up well to freezing — and based on this new study, it could also benefit the environment.

According to study author Cristina Bilbao-Sainz, if today’s methods of preserving food were replaced by this less energy-intensive technique, the reduction in carbon emissions would be equivalent to removing about one million cars from roads.

“These savings could be achieved without requiring any significant changes in current frozen food manufacturing equipment and infrastructure, if food manufacturers adopt this concept,” she added.

The big picture: It’s highly unlikely that the frozen food industry is going to decide to revamp its entire workflow any time soon, and the reduction in carbon emissions isn’t that significant — for context, there are well over one billion cars on the road.

Still, preserving food  with isochoric freezing could help expand the types that can be frozen without sacrificing quality, and the researchers are now looking for commercial partners to get it out of the lab and into the real world.

“The entire food production chain could use isochoric freezing — everyone from growers to food processors, product producers to wholesalers, to retailers,” study author Tara McHugh said.

“With all of the many potential benefits, if this innovative concept catches on, it could be the next revolution in freezing foods,” she added. 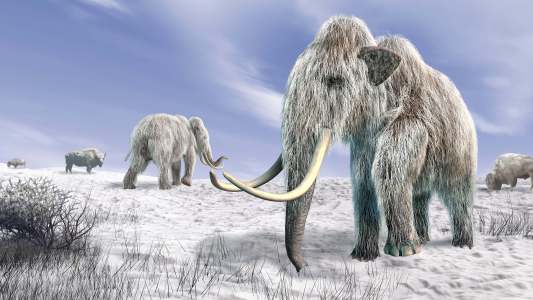 Genetics
Can the woolly mammoth save Siberia from climate change?
By Kristin Houser
Subscribe to Freethink for more great stories
Subscription Center
Sections
Video
Freethink
Subscribe
We focus on solutions: the smartest people, the biggest ideas, and the most ground breaking technology shaping our future.
Subscribe