A new “de-extinction” startup co-founded by Harvard geneticist George Church aims to resurrect the woolly mammoth — or something like it — and then release herds of the creatures in Siberia to help combat climate change.

The challenge: Permafrost is ground that remains frozen for at least two years, typically near the poles. It can be anywhere from a few feet to nearly a mile thick, and it is usually covered by an “active layer” of soil that thaws in the summer and freezes in the winter.

The warming climate is now causing more permafrost to thaw at an accelerating pace. That releases greenhouse gasses that were frozen in the permafrost, further contributing to the problem of global warming — it’s a self-perpetuating problem.

There may be a natural solution — the only problem is that it went extinct about 10,000 years ago.

The out-there idea: De-extinction is the process of resurrecting an extinct species using cloning or gene editing technology. The woolly mammoth is a popular candidate for revival, due to its charismatic history — and, for some, its potential to slow permafrost thawing.

In the pleistocene, the giant animals would knock down sunlight-blocking trees in the Siberian tundra and leave droppings that fertilized the soil, proponents claim — recreating that ecosystem could encourage the growth of grass, which is better at insulating the ground from summer heat than the moss that currently dominates the landscape.

Woolly mammoths would also compact the thick fresh snow that forms an insulating barrier between the cold air and the soil during the winter months — that could help the ground reach the coldest temperatures possible.

A Colossal mission: Church has been researching the de-extinction of the woolly mammoth for years, and his team has already sequenced several mammoth genomes and identified genes linked to desirable traits, such as the ability to withstand cold.

On September 13, Church and tech entrepreneur Ben Lamm announced the launch of Colossal, a new startup focused on species de-extinction.

“The goal is…large populations with genetic diversity that can interbreed.”

The company’s first goal will be to use CRISPR to edit mammoth traits into the DNA of their closest living relative, the Asian elephant, to produce a woolly-elephant embryo — that’ll likely take years and the $15 million the company has raised so far, at a minimum.

Within six year, Colossal hopes to produce a mammoth calf using an artificial womb — that approach will be far, far more technologically difficult than attempting to use elephants as surrogates, but it will also make it easier to scale up experiments.

“Our goal at the company is not just to bring back a successful small herd of woolly mammoths,” Lamm told Popular Science. “The goal is for successful rewilding of the mammoths back into the Arctic. That means large populations with genetic diversity that can interbreed.”

The cold water: Nothing about this project will be easy.

Even if Church’s group can overcome the many technical challenges — editing mammoth genes into elephants, creating a never-before-seen artificial womb, raising healthy and fertile animals, etc. — it will still need to obtain permission from regulators to release a “new” species into the Siberian wild.

The project also raises ethical issues — some experts argue that de-extinction is always a bad idea, and others think that this project in particular is problematic.

“Elephants are not just sentient creatures — they’re really smart, they are really self-aware and emotionally complex,” moral philosopher David DeGrazia told STAT. “I don’t think we should involve them in experiments that are not in their best interest.”

The big picture: Even if Colossal never gets a woolly mammoth on the ground in Siberia, the project could help advance gene-editing technology, according to Tim Draper, a venture capitalist who has invested in the company.

“In the de-extinction process Colossal will build world-class software products for CRISPR and their breakthroughs will have major implications for biotechnology products, treatment of diseases, and genomics,” he wrote in a statement, according to STAT. 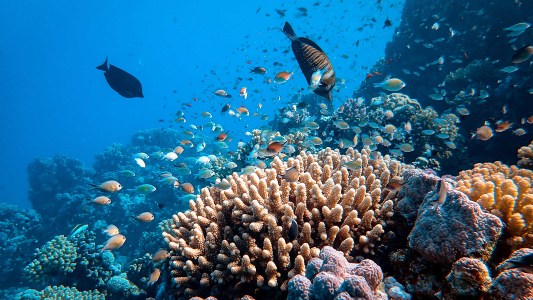 A new study has found that probiotics can help corals fight coral bleaching.