Over the next few years, the demand for carbon offsets is expected to boom as corporations look to buy credits to help them achieve their climate and sustainability goals — compensating for emissions they can’t reduce on their own.

For their part, a Maine startup is growing vast quantities of seaweed — enough to pull CO2 from the atmosphere — then burying them at the bottom of the ocean to sequester carbon for millennia and selling the marketable carbon offsets.

Casting a Net for Carbon Offsets

Ask a young Adam Baske what he wants to be when he grows up, and the answer is obvious: fisherman. Living near the shore of Lake Michigan, he envisioned becoming a bass or carp fisher. Now, decades later, Baske is angling for something different — atmospheric carbon.

“An aspect of the fishing tradition is the ability and the necessity to adapt as species change, as climates change, and as ocean conditions change. So this is part of that change,” he says.

Baske is the head of business development at Running Tide Technologies, a Maine shellfish hatchery that now also grows and buries kelp for the carbon offsets market.

Researchers are looking for innovative ways to sequester more and more carbon, with ideas like industrial scrubbers and genetically modified trees. If those sound too futuristic and far-fetched — enter the humble seaweed to save the day.

Tropical forests are considered guardians against climate change because of their ability to remove carbon dioxide from the atmosphere. But, as deforestation and fires destroy forests, releasing the carbon back into the atmosphere, researchers are looking to another forest — seaweed. These underwater jungles are very efficient at storing carbon.

Like trees, kelp takes carbon dioxide out of the atmosphere and stores it in their tissues during photosynthesis. Colette Feehan, a marine ecologist at Montclair State University who does not work with Running Tide technologies, says that kelp forest productivity is comparable to tropical rainforests. The plant needs sunlight at the surface to grow and absorb carbon. But once it reaches deep water, where the environment limits decomposition, the carbon would be entombed for hundreds or thousands of years.

These innovative ideas to sequester carbon in the short term, in order to buy time, to develop broader strategies to reduce emissions — I think it’s really optimistic.

Kelp grows fast and sinks quickly, but Feehan says we can only assume that it is sequestering a lot of carbon. We need more research to say just how much.

“What we know less about is what the fate of that tissue is when the kelp’s died,” she says.

Research is beginning to show that large-scale seaweed farms can play an essential role in offsetting carbon emissions. One study found that farming seaweed in 3.8% of California’s federal waters could offset carbon emissions from the state’s $50 billion agriculture industry.

The catch: not many people have figured out how to make it happen. Seaweed typically grows near the coast, where sunlight penetrates the shallow water. But while shallow water is great for kelp growth, it needs deep water for sequestration to work.

Adam Baske says Running Tide Technologies is on the verge of figuring it out.

Baske’s solution is growing the kelp on mini-farms attached to biodegradable floats, which are set adrift in the deep ocean.

While it’s growing, the floats keep the kelp near the surface, capturing essential sunlight. Once the kelp reaches a critical length and weight (after about six months), the carbon-laden fronds are too heavy for the buoy, and the entire mini-farm sinks to the seafloor. Boom. Sequestered.

“These innovative ideas to sequester carbon in the short term, in order to buy time, to develop broader strategies to reduce emissions — I think it’s really optimistic,” Feehan says of Running Tide Technologies.

Baske says the project is still in the research and development stages. They have about 1600 buoys, affixed with sensors and trackers, already set adrift, so they can answer questions like how much carbon is stored, if these may be a threat to marine mammals and ships, etc.

Independent research groups, like Ocean Solutions, are assessing the environmental impact and feasibility of the project. In the future, Baske says, they hope to have millions of micro-farms, sponging up billions of tons of carbon.

In recent years, the increasing effects of climate change — fires, drought, floods, etc. — are putting more and more pressure on cities, countries, and corporations to reach “net-zero” — an overall balance between the amount of emissions produced and the emissions taken out of the atmosphere.

“The carbon offsets market is where we’re seeing this having a future. Already massive companies and cities and towns, and even countries are making net-zero commitments,” says Baske, “It means they’re offsetting their emissions while they’re also reducing their emissions.”

The e-commerse company, Shopify, is the first to buy carbon offsets from Running Tide Technologies.

“Some of the biggest companies in the world already have net-zero commitments and are hungry for permanent, verifiable, carbon offsets. They’re driving this. We’re confident that we can be one of these solutions,” he says. 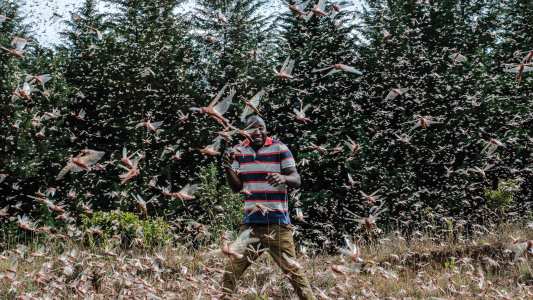 Billions of locusts descended on East Africa in 2020, where new technology helped stop their spread.