Saildrone, the uncrewed sailing vessel, is hitting the high seas once again.

After an epic mission to film the center of Hurricane Sam and an ambitious task to map parts of the Pacific seafloor, Saildrone has deployed three vessels into the Gulf Stream this winter to collect data on carbon uptake — how much carbon dioxide the oceans are absorbing.

The mission: Embarking from Newport, R.I., three Saildrones will go on a six-month mission in the North Atlantic’s fastest current — the Gulf Stream — collecting carbon uptake data throughout the winter.

The Gulf Stream absorbs a significant quantity of carbon from the atmosphere. But exactly how much is still in question.

The world’s seas have been absorbing carbon dioxide from the atmosphere for eons. The Gulf Stream is an important player in that process. Phytoplankton — tiny drifting plants — absorb carbon dioxide via photosynthesis. And carbon dioxide dissolves in saltwater directly and produces bicarbonate, a kind of carbon that is difficult to remove from the ocean. But the process of carbon uptake also produces carbonic acid, lowering the ocean’s pH and making it more acidic.

The fleet of drones will collect data on the rate that our oceans absorb carbon. One Saildrone will be stationed east of Cape Hatteras, N.C., another will be mid-stream, and a third will be off Newfoundland’s Grand Banks.

All three vessels will autonomously travel the Gulf Stream back and forth, collecting carbon uptake data, reports CNN.

Why this matters: With so much focus on addressing climate change, we’ll need reliable carbon measurements to understand the global carbon budget — how much carbon humans are putting into the air, where it goes, and what it’s doing there.

Scientists are aware that the Gulf Stream absorbs a significant quantity of carbon from the atmosphere. But exactly how much is still in question. Even the best data is still only estimates based on statistical approaches.

The team of researchers from URI and the European Centre for Medium-Range Weather Forecasts (ECMWF) hope the data will help eliminate the uncertainty, reports New Atlas. The work could improve climate and weather forecasting models.

“There is a lot of uncertainty in ocean carbon uptake – nearly 4 billion tons of CO2 separates the average of the model-based estimates from observation-based estimates,” said project co-lead Jaime Palter. “That’s nearly as much CO2 as is emitted by the US [about 5 billion tons] each year! With more in situ observations we can do better.” 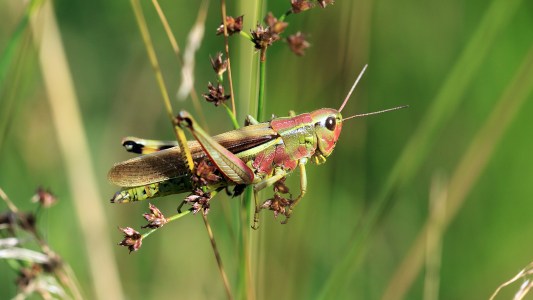 The large marsh grasshopper risks extinction. But volunteer citizen keepers are raising the insect for rewilding to newly restored wetlands.