In just three days in August, over 13,000 lightning bolts struck California, setting off nearly a thousand wildfires. Four of those fires ranked in the top five biggest to hit the state in modern history — but they might not be among the biggest for long.

Climate change is causing the world to be drier and hotter, producing the ideal conditions on the ground for a lightning strike to trigger a wildfire (especially in places like California, which has a huge buildup of fuel in its forests).

While we might not be able to stop those lightning strikes from happening, scientists in Australia (also recently pummeled by wildfires) have come up with a radical plan to control lighting — by redirecting bolts with a laser beam.

That surge will follow whatever path through the air is the most electrically conductive (which is why lightning comes in jagged bolts, instead of just shooting straight to the ground).

If we can create a more attractive path for lightning to follow, then, we may be able to control lightning, diverting it away from, say, a big, dry field and toward a lightning rod.

The Australian scientists aren’t the first to propose this — they aren’t even the first to suggest using lasers for it — but they may be the first to figure out how to do it efficiently, in a way that we might actually be able to put into practice.

At the core of their study is a type of laser called a tractor beam (yes, like in Star Wars). The researchers developed their tractor beam to have a hollow center and to trap and heat tiny particles of a highly conductive material called graphene within that center — all they had to do was spray the particles into the air around the beam.

The intensity of this laser is a thousand times lower than those previously developed to control lightning, which the researchers say makes it safer, cheaper, and more precise.

“It turns out that to deliver particles, you do not need high-intensity lasers, even low intensity like your laser pointer will be already enough,” researcher Andrey Miroshnichenko told Agence France Presse.

We can control where and when the discharge should happen.

During lab experiments, they placed two electrically charged plates parallel to one another, simulating the negatively charged cloud and the positively charged ground.

They shone their laser across the space between the plates and sprayed their graphene particles into the air. The beam trapped the particles and induced the bolt of electricity to follow the path of the beam.

“(The experiment) showed that we can control where and when the discharge should happen, between the two plates under lab conditions,” Miroshnichenko told New Atlas.

Of course, there’s a huge leap from controlling a tiny bolt of electricity under lab conditions to showing you can control lightning in the wild, but Miroshnichenko said the tech shouldn’t be too difficult to scale up.

Eventually, they might even be able to replace the graphene spray with particles already in the air around their laser.

“Material actually does not matter,” researcher Vladlen Shvedov told Freethink. “We choose graphene particles because they are light and they are a good absorber of laser radiation.”

“In our paper, we demonstrated the effect with (tiny glass spheres and steel spheres) as well,” he added. “The result was similar to that with graphene.”

Out of the Lab

The researchers hope to have field experiments completed within four years.

If those go well, Shvedov said he envisions a set up where the lasers could be mounted somewhere safe and then operated during a storm, directing where lightning hits.

“We can imagine a future where this technology may induce electrical discharge from passing lightning,” Shvedov said in a press release, “helping to guide it to safe targets and reduce the risk of catastrophic fires.”

Clean Energy
New solar device can pull hydrogen straight from the air
Researchers have created a solar-powered device that can pull water from the air to create hydrogen. 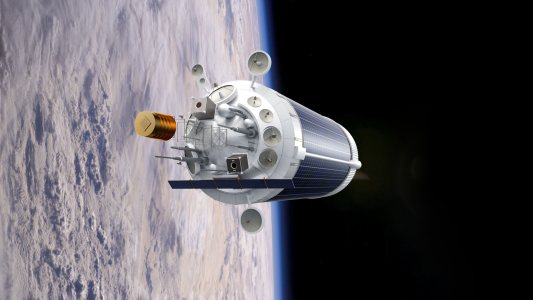 Outer Space
The plan to convert space debris into labs for astronauts
Subscribe to Freethink for more great stories
Subscription Center
Challenges
Video
Freethink
Subscribe
We focus on solutions: the smartest people, the biggest ideas, and the most ground breaking technology shaping our future.
Subscribe