Decades of space exploration have turned low Earth orbit into a junkyard, packed with millions of objects we shot into space but never removed.

From spent rockets to slippery screwdrivers, this space debris is zipping around the planet at a speed nearly 10 times that of a bullet — and a collision, with so much as a rogue screw, could trigger a domino effect that causes tremendous damage to our operational satellites and spacecraft, potentially putting astronauts’ lives at risk.

Earth’s orbit is only expected to get more cluttered in the future, thanks to cheaper rocket launches and tiny satellites, so removing space junk is now a priority for the aerospace industry.

But space services company Nanoracks has a different plan: instead of removing larger pieces of space debris, it wants to convert them into mini space stations for astronauts.

From Space Debris to Space Station

For more than 10 years, Nanoracks has helped researchers, private companies, and space agencies get tech into space.

It now wants to leverage that experience to create commercial space stations called “Outposts” out of space debris. Specifically, it wants to build them out of rockets’ “upper stages,” the part that gives a payload its final boost into orbit.

Not only do upper stages already have their own propellant tanks and engines, they’re also large enough to house people — properties would make them ideal for conversion into Outposts. The best thing is that they have already done the hardest (and most expensive) part: actually getting into space.

Transforming space debris into something any human is willing to enter will not be easy.

Nanoracks’ plan is to have autonomous robots handle the conversion work: collecting the upper stages and adding solar panels, new propulsion systems, and the like.

The cost-efficient platforms could serve as hotels, research parks, fuel depots, and more.

But first, it needs to prove it’s even possible for a robot to cut, weld, and perform other manufacturing processes effectively in space, where dust, radiation, and temperature fluctuations might gum up the works.

The company also needs to prove it’s possible to build its Outposts without contributing to the problem of space debris — if a robot cuts into a rocket stage and sends metal shavings flying out into orbit, that could damage other spacecraft.

“There’s a lot we need to learn if you really go into reuse in space hardware,” Manber told Wired. “These sorts of things seem mundane, but we just have to do it step by step.”

The first major step is scheduled for May 2021, when Nanoracks will launch a small chamber to serve as the first Outpost demonstration.

Inside the chamber will be a robot arm with a special drill bit, and once in space, the bot will use the bit to make a series of cuts to materials like the ones used to build fuel tanks for upper stages.

If the mission is a success, the cuts won’t produce any shavings and Nanoracks will have proven it’s possible to remotely and safely cut metal in the vacuum of space — moving one step closer to its goal of converting space debris into space stations. 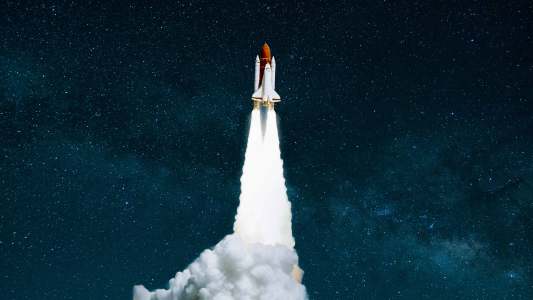 Outer Space
Fusion-powered spaceships could take us into deep space
By Amanda Winkler
Subscribe to Freethink for more great stories
Subscription Center
Sections
Video
Freethink
Subscribe
We focus on solutions: the smartest people, the biggest ideas, and the most ground breaking technology shaping our future.
Subscribe