Commuters in Stockholm will soon have the opportunity to hop aboard an electric ferry that “flies” across the water — and if the vessel does well during its pilot test, it could one day play a key role in making public transportation more sustainable and convenient.

The challenge: Cars are a major emitter of greenhouse gasses, so one of the best ways an individual can help the environment is by taking public transport. In the Swedish capital of Stockholm, which is made up of 14 islands, that often means hopping aboard a ferry.

While 1.2 million passengers already opt to travel via the city’s ferries every year, that number might be higher if the system’s schedule wasn’t so restrictive — some routes have just a couple of departures per day.

The ferry trip isn’t any faster than a commute via car for some routes, either, and Stockholm’s ferries are diesel-powered — that means they may be better for the environment than everyone driving their own car, but they still pump harmful pollution and greenhouse gasses into the air.

The electric ferry: In 2023, Stockholm will launch a nine-month pilot of the Candela P-12 Shuttle, a 30-passenger electric ferry developed by marine tech company Candela.

Candela’s ferry will travel just one route, carrying passengers between Stockholm’s city center and the suburb of Ekerö. During rush hour, this one-way trip takes 50 minutes via car, bus, or diesel ferry, but the P-12 can make it in just 25 minutes.

That’s thanks to the ferry’s hydrofoils.

These wing-like structures on the underside of the P-12 lift the hull of the vessel above the water as it travels. This makes the electric ferry look like it’s flying and prevents it from creating a wake, the V-shaped wave created by drag through the water.

The larger the boat and the faster it’s moving, the bigger the wake, and because strong wakes can cause damage in crowded waterways, officials often enforce strict speed limits to prevent their formation.

Because Candela’s electric ferry doesn’t produce a wake, Stockholm is making it exempt from its speed limits — instead of gliding along at a maximum speed of 12 knots (less than 14 miles per hour), it’ll be able to reach speeds up to 30 knots (nearly 35 mph).

The Stockholm-Ekerö route is currently serviced by two 200-person diesel ferries, but during the pilot, at least five P-12s will be in operation, giving passengers much more flexibility when planning their commutes.

“Instead of two departures per day, there would be a P-12 Shuttle departing every 11 minutes,” said Erik Eklund, Candela’s head of sales and marketing. “This allows commuters to ignore timetables and just go to the dock and wait for the next boat.”

Looking ahead: Candela says its electric ferry has a cost per passenger mile that’s just 10% of a traditional diesel ferry’s — if that’s right, and the pilot goes well, we could soon see the ship hovering across waterways around the world.

“The company sees a huge demand from over 600 cities, municipalities, vessel operators, and urban developers that already have expressed interest in the P-12 Shuttle as a faster, cheaper, and green alternative to existing diesel ships or land transport,” according to Candela. 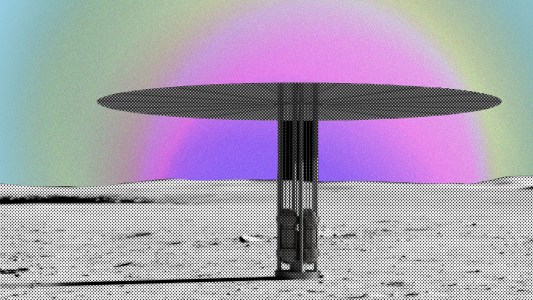 NASA has given three companies $5 million contracts to develop mini reactors capable of generating nuclear power on the moon by 2031.

Aerospace
NASA is closer than ever to generating nuclear power on the moon
Subscribe to Freethink for more great stories
Subscription Center
Challenges
Video
Freethink
Subscribe
We focus on solutions: the smartest people, the biggest ideas, and the most ground breaking technology shaping our future.
Subscribe