Researchers sailing aboard the (presidentially named) vessel Martin Sheen have discovered what they believe to be a new species of beaked whale off the coast of Mexico.

The whale appears to have distinct physical characteristics, as well as its own idiosyncratic acoustic signals, but environmental DNA samples have been taken that will potentially confirm if the whale is indeed never-before-seen.

According to a press release from the Sea Shepherd Conservation Society, the whales were sighted off the Pacific coast of Mexico, 100 miles north of the remote San Benito Islands.

The ship was there to investigate the origins of a mysterious underwater acoustic signal. Cetaceans, like whales and dolphins, make distinct acoustic signals that can be used to identify their species.

And the Martin Sheen may have found the source.

The Call of the Beaked Whale

“Something that was not expected in this area, something that doesn’t match, either visually or acoustically, anything that is known to exist. It just sends chills up and down my spine when I think that we might have accomplished what most people would say was truly impossible — finding a large mammal that exists on this earth that is totally unknown to science.”

The mystery signal that drew their attention, dubbed BW43, was recorded in the region in 2018, and had previously been heard off California as well.

Researchers thought it may be the calls of Perrin’s beaked whale, which has never been confirmed to be seen alive. According to Sea Shepherd, the whale’s population size and geographic range are unknown. (Not an unusual case with these whales, apparently, which according to NBC tend to swim and feed about, oh, 3,000 feet down.)

A beaked whale does indeed appear to be the culprit, but not the beaked whale they suspected. A number of physical differences — and that special sound — has led the researchers to believe their beaked whale is a previously undescribed one.

Henderson explained that when the team looked at the photos of the beaked whales, they realized they were likely not Perrin’s; the teeth were in a different spot, further back than in the Perrin’s, and color patterns, size, and, once again, acoustic signals all pointed to a different animal as well.

The Proof Is in the Sea: Environmental DNA

Observations, photos, and recordings just aren’t enough to declare a new species these days — no matter how experienced the people making them.

For that, scientists turn to genes.

The crew of the Martin Sheen didn’t stick the mystery whale to get a sample, however; instead, they’re relying on a technique called environmental DNA.

“Environmental DNA, in its simplest sense, is DNA extracted from any type of environmental sample (e.g. soil, water, air, etc.), without isolation of a particular organism,” Bangor University’s (UK) Mathew Seymour wrote in Communication Biology; i.e., you’re sampling the spot, not the critter.

This is useful for when you want to get a genetic snapshot of the environment, not just one particular animal, perhaps to clock biodiversity, or, as in this case, to potentially get a genetic sample without directly contacting the subject.

Targeted environmental DNA assays use PCR to look for the genetic sequences of a specific animal; semi-target wants a broader picture, an attempt to achieve the goal of using environmental DNA to, as Seymour put it, “identify and summarize the biological communities, much like a tricorder in Star Trek.”

By gathering samples of the sea water that the whales were moving through, the researchers hope to be able to determine definitely if they’ve discovered a new whale species.

“We’re literally taking water samples from where the whales dove, so right where they were,” Henderson told Mongabay. “The hope is that there’s some genetic material left in the water, whether that’s sloughed skin, whether it’s some remnants of fecal matter.”

If they’re right, it would be the 24th beaked whale species classified. 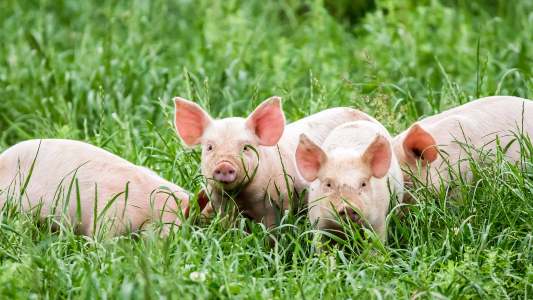 The FDA has approved Revivicor’s genetically engineered GalSafe pigs for use as food or medical products — a first for genetically modified animals.