Filling up the tank in a gas-powered car takes just minutes. Charging the battery in an electric vehicle (EV), however, can take hours — one significant drawback to EVs that is stifling adoption.

That could be changing soon, though, as Israeli startup StoreDot has demonstrated an EV battery, powerful enough to drive a scooter, that fully charges in just five minutes — and it could be manufactured on existing factory production lines.

If it pans out, it will be a big step toward upgrading EVs across the board.

Many of the EVs on the market today get between 200 and 300 miles on a full charge. Most people drive less than that in a day, so they just charge their EV battery while they’re at home or at work — no need to kill time at a charging station.

However, slow charging can be a real drag on longer drives — imagine going on a road trip and having to take an hours-long charging break every 200 miles (or wherever charging stations happen to be available).

The reason we can’t pump electricity into batteries as quickly as gas into tanks has to do with the physics of the batteries.

Most of today’s EVs use lithium-ion batteries, the same kind you’ll find in your smartphone or laptop. These batteries all have two electrodes (one positive and one negative), and the negative one is usually made of graphite.

StoreDot’s EV battery replaces the graphite electrode with one made from nanoparticles based on the chemical element germanium — this allows the ions to flow more smoothly and quickly, enabling a faster charge.

In 2019, StoreDot demonstrated that it could fully charge an EV battery big enough to power an electric scooter in just five minutes. Now, it has manufactured 1,000 of the batteries in a factory to prove that they can be mass produced on the same lines as standard EV batteries.

“(W)e are not releasing a lab prototype,” CEO Doron Myersdorf told the Guardian. “We are releasing engineering samples from a mass production line. This demonstrates it is feasible and it’s commercially ready.”

However, besides the fact that they’ve only demonstrated this on a scooter battery so far, there’s another catch to fast-charging EV batteries.

Today’s charging stations are specifically designed to only pump out as much electricity as the average EV battery can handle, meaning they would still take longer than five minutes to fully charge one of these new batteries.

As pointed out by InsideEVs, StoreDot hasn’t revealed exactly what voltage its batteries require to charge in five minutes nor how fast a charger must be.

The company did say, though, that it hopes to unveil a battery that can provide 100 miles of range to a car after five minutes plugged into one of today’s chargers by 2025.

StoreDot is also working to cut manufacturing costs — later this year, it plans to unveil prototypes of its EV battery that use silicon instead of the germanium-based nanoparticles. Those batteries would cost about the same as today’s graphite models to mass produce.

“We are proud to make these samples available, but today’s milestone is just the beginning,” Myersdorf said in a press release. “We’re on the cusp of achieving a revolution in the EV charging experience that will remove the critical barrier to mass adoption of EVs.” 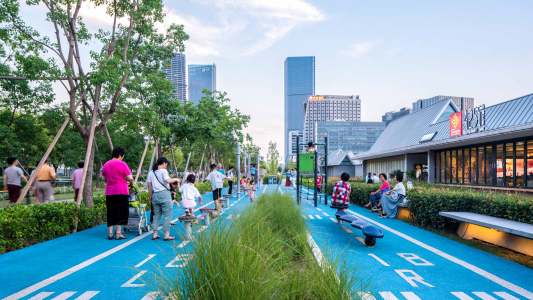 To provide cities with more green spaces, designers turned a former airport runway into an urban park and an abandoned mall into a recreational lagoon.

Urban Living
This urban park used to be an airport runway
Subscribe to Freethink for more great stories
Subscription Center
Challenges
Video
Freethink
Subscribe
We focus on solutions: the smartest people, the biggest ideas, and the most ground breaking technology shaping our future.
Subscribe