Buildings are one of the largest drivers of climate change, contributing significantly to greenhouse gasses. But green buildings, thoughtfully constructed, can become a part of the solution – by acting like a sponge, soaking up carbon dioxide from the atmosphere.

Chris Magwood knows precisely what it takes to build his dream home. Just ask him. Unlike people who describe stylish furnishings or the latest smart-home gadgets, Magwood first considers the home’s impact on the climate. He wants buildings to be “green.” But to accomplish that, the building trade needs to redirect its focus.

So much of the focus of “green buildings” is on energy efficiency – triple pane, gas infused windows that lock in heat or closed-cell spray foam insulation. These technologies are designed to reduce the need for heating and cooling and therefore reducing greenhouse gas emissions, like carbon dioxide.

But Magwood, director of The Endeavour Centre Sustainable Building School, says that building such a structure might actually contribute more greenhouse gasses than raising a basic building. It all boils down to “embodied carbon” – carbon embedded in the materials used in construction.

“When you make cement you literally burn the CO2 out of the limestone and put it in the atmosphere. Or when you make foam-based insulations, you release high potency greenhouse gases,” he says, “All of that adds up…if a quarter of all our emissions come from making those materials, we’re not really going to be able to meet any reasonable climate change targets.”

Embodied carbon is different from the carbon dioxide released during the operational phase, the period after construction when people move in and use the building. So, a structure made with say – XPS and closed-cell foam insulation, carpet, and vinyl windows – may be the most energy-efficient during the operational phase, but taking into account the materials and it becomes a significant source of carbon emissions. In his recent study Magwood, who built his own strawbale home, suggests opting instead for sustainable building materials like straw and wood fiberboard insulation, softwood floors, and wood windows.

Ruthie Mundell, board member of Build Reuse, an organization that advocates for turning construction and demolition waste into resources, says that deconstructing old buildings and reusing the materials can be one way to reduce carbon dioxide emissions. Her fifteen years in the reuse industry, primarily at Community Forklift, was instrumental in making building reuse more mainstream.

“I have long been frustrated by how green building focuses on fancy high tech electronic gadgets and HVAC equipment and give less attention to the environmental cost of the building materials used, how long they will last, and if they can eventually be reused or composted,” she says, adding that most of a building, especially older ones, can be taken apart and reused instead of demolished. Doing so would eliminate the impact associated with manufacturing new materials.

“When we build with new materials, we’re ignoring the fact that there is a ton of existing buildings in this country that are unwanted. It makes no sense to demolish them,” Mundell says, “It doesn’t matter if you used fast-growing bamboo or another low-carbon product if right across the town, someone is burning or burying old-growth lumber joists that you could have used.”

Having an overall aim of zero net carbon emissions for green buildings – from materials harvest and manufacturing, to the energy needs of the structure – is just a starting point. In his study, Magwood shows how buildings can actually pull carbon dioxide from the atmosphere. If that happens, it will transform the building trade as we know it.

The building sector is one of the biggest contributors to climate change – contributing nearly 39% of global energy use and energy-related carbon dioxide emissions. Embodied carbon is responsible for 11% of total greenhouse gas emissions. But using materials that store carbon, like straw, wood, linoleum, and cedar, can actually soak up carbon dioxide from the atmosphere and store it in the building’s walls. It may seem counterintuitive, but just through careful selection of materials, the building sector could transform from a major carbon emitter to a carbon sink.

Building with carbon-intensive materials increases the upfront embodied carbon footprint. Magwood says that the ability to store carbon makes up for the less “energy efficient” structure. In his paper, he even calls for stricter regulations and policies enforcing caps on up-front embodied carbon.

Ravi Srinivasan, of University of Florida’s Low/Net Zero Energy Buildings, agrees with Magwood. In essence, the building trade needs to consider the energy efficiency of a building and the materials that go into it. But he says the biggest challenge will be the “silos” – distinct teams who work on energy technology, materials, etc.

“What we need is a system that would bring everybody together and then work together so that every aspect of the building – from the time it’s designed to the time it’s put together and when it’s officially demolished 75 years from now – everything should be working in synchrony. That’s not actually happening,” Srinivasan says.

But Magwood is optimistic about the collaborative potential of the building trade to transform the so-called “green building.”

“There’s such a dramatic need to address climate change now. I just happened to be working in an industry that is a) the biggest contributor to climate change and b) has all of these really direct and meaningful things that it can do to not just lessen its impact, but literally reverse its impact. That just makes me really excited about the fact that I can make a climate change reversing building,” he says.

When buildings are designed to be a carbon sink, it is possible to make a zero-net carbon structure. And – even better – carbon-storing buildings that are powered by renewable energy can actually reverse climate change. 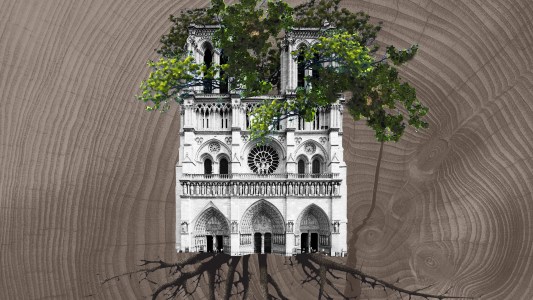 Studying the scarce, centuries-old logs that remain from the Notre Dame attic will help scientists reconstruct medieval climate data to see if temperatures were ever this high.

Climate Crisis
The hidden history in the Notre Dame attic
Subscribe to Freethink for more great stories
Subscription Center
Challenges
Video
Freethink
Subscribe
We focus on solutions: the smartest people, the biggest ideas, and the most ground breaking technology shaping our future.
Subscribe