From the land of Thor comes an idea as wild as the weather it is meant to mitigate: a mass of bubbles — acting like something of a hurricane net — cooling down water temperatures in the storm’s path and limiting the energy it can siphon from the sea.

The Norwegian company OceanTherm already uses their “bubble net” method to keep some of the nation’s fjords from freezing over; now, they’re proposing using it to create a roiling hurricane net, reports WIRED‘s Eric Niiler.

The idea is beautifully, sublimely simple — and wildly ambitious: pump air through a submerged length of pipe between two ships, releasing an inverse-Niagara of bubbles, which stretch and surface like mighty Jörmungandr, pushing up water from the ocean depths.

Hurricanes gather strength from warm water. When storms hit warm patches on the surface, they can rapidly gain strength (as Hurricane Laura did), putting people and property at risk, complicating attempts to save lives and creating ever more hurricane victims.

But deep water tends to be colder than water near the surface. By bringing up that colder water, OceanTherm believes they may be able to cool conditions down enough to rob the cyclone of fuel.

“If we were able to avoid the water being so hot, the hurricanes won’t be able to build such strength,” Olav Hollingsæter, OceanTherm’s CEO, told Niiler.

(The relatively narrow 135-mile Straits of Yucatán, between Mexico and Cuba, could be an ideal spot to lay a hurricane bubble net.)

There’s some proof-of-concept for a win in bubbles vs. nature: since the 1960s, bubble nets have been used to keep fjords ice free, Niiler writes. In the winter, cooler river water running into the fjords actually makes the surface there colder than the deeps. To keep ice out of these deep, narrow channels, OceanTherm’s bubbles push the warmer, saltier sea water to the surface.

Keeping a narrow fjord from freezing over and defueling an entire hurricane are two very different things, however. Some scientists are skeptical OceanTherm’s idea could work. A hurricane may simply be too complex to effectively alter by cooling off a patch of water in its path.

“Hurricanes certainly need warm water, but they also need convection, a rotational component, and light wind shear above them,”  James Fleming, a professor at Colby College and a visiting professor at Harvard University, told Niiler.

But with warming oceans poised to increase the strength of hurricanes over the next century, such geoengineering experiments are worth exploring. (Whether a frothy hurricane net can work or not, it still seems like a better plan than nuking them.)

Agriculture
After millennia of agricultural expansion, the world has passed “peak agricultural land”
This marks a historic moment in humanity’s relationship to the planet.
Up Next 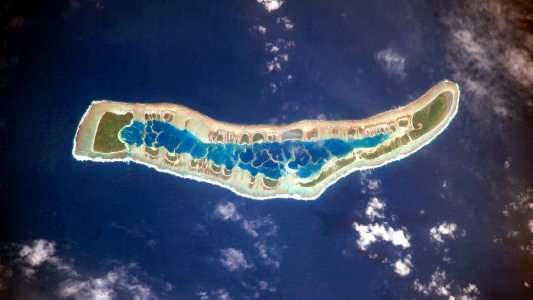 The president of Kiribati announced a new plan to fight against sea level rise: raise the islands.

Climate Crisis
Raising Pacific islands to save them from high sea levels
Subscribe to Freethink for more great stories
Subscription Center
Challenges
Video
Freethink
Subscribe
We focus on solutions: the smartest people, the biggest ideas, and the most ground breaking technology shaping our future.
Subscribe