Lithium-ion batteries are ubiquitous, used in everything from portable electronics to cars. But as useful as they are, we’ve all known the frustration of batteries running out at the worst possible time. And if you’re very unlucky, you may have even seen one catch on fire — a rare but serious risk (which is why you can’t put them in your checked luggage on airplanes).

To improve battery life and safety, scientists are trying to replace the liquids commonly used in batteries with something solid. Now, a team of researchers has found a surprising but promising source for that material: trees.

The challenge: One of the biggest challenges in battery innovation is trying to replace the liquid electrolyte (the material that allows ions to flow inside the battery) with a solid material, while maintaining ion conductivity. One of the essential qualities of a battery, ionic conductivity is the ability of a battery to transmit current through its structure, which is directly related to the battery’s power.

“Using materials nature provides will reduce the overall impact of battery manufacture to our environment.”

A team of engineers from the University of Maryland and Brown University has found a fresh way to boost ionic conductivity by using threadlike tubes generated from trees.

Trees in action: The team, led by engineer Liangbing Hu, used the small tubes (called “cellulose nanofibrils”) mixed with copper to create channels for ion conduction — the movement of an ion from one place to another.

Imagine that pushing a bowling ball up a hill is your battering charging up — ions moving from a negative electrode to a positive electrode. The ball rolling back downhill is the battery discharging, providing power to your camera, phone, or EV in the process.

The microtubes are essentially smooth paths uphill and downhill, allowing the electricity to flow easier through the battery, which allows it to charge and discharge faster.

The material is simple to put together, cheap, durable, and environmentally friendly to produce, the team reports. They published their work in Nature.

Why this matters: Lithium batteries with liquid electrolytes are effective, but they come with their own set of problems. They are notoriously bad for the environment, and, when spent, they are classified as hazardous waste because they can contain mercury, sulphuric acid, lead, cadmium, and other toxic materials.

And they can have a nasty habit of randomly catching on fire or exploding, as some unfortunate electric car owners are all too aware.

Solid-state batteries don’t come with as hefty an environmental cost. But they have other challenges — specifically, finding the optimum material for a solid electrolyte with excellent ionic conductivity and durability.

So far, the best solid electrolytes are just OK. Many are constructed from non-flammable materials, generally ceramics, which are excellent at conducting ions but also brittle. Cracks and fractures can occur due to stresses encountered during manufacture, and charging and discharging tends to degrade the material and eventually causes the battery to short circuit.

The material in this study solves many challenges. It is thin and flexible, similar to a sheet of paper, and its ionic conductivity is comparable to that of ceramics, the team reports.

This new engineering technique is the starting point for a strategy for designing solid-state ion conductors. They may also be used in fields other than batteries, such as data processing and storage or solid-state sensors, general sensors that measure temperature or pressure by exploiting a physical change within the sensor. 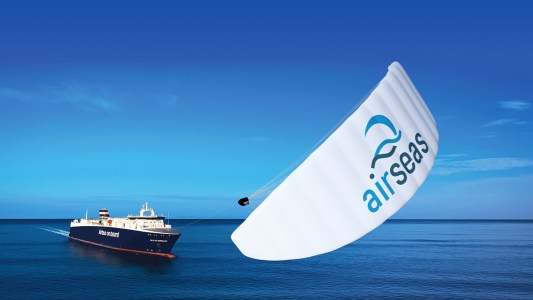 Airseas, a French startup, has just revealed a prototype automated Seawing kite. It is fitted onto a giant Airbus cargo ship and is meant to reduce carbon emissions.

Climate Crisis
The return of sail power
Subscribe to Freethink for more great stories
Subscription Center
Challenges
Video
Freethink
Subscribe
We focus on solutions: the smartest people, the biggest ideas, and the most ground breaking technology shaping our future.
Subscribe