Imagine a city that can glow in the dark, without electricity. One day, this could be a reality, thanks to luminescent materials.

Such materials are already being used for emergency lighting, street markers, and decorations. But, someday they could be used to cool our cities, and simultaneously cut down on electricity use.

The cooling effect: Urban heat islands form because cities are dense concentrations of heat-absorbing materials — like steel buildings or asphalt streets and parking lots. These materials absorb energy from the sun and release it as heat.

To keep things cool, researchers are coming up with complex technologies like radiative cooling or simple solutions, like covering rooftops with white cooling paper or painting them with ultra-white paint.

“It’s better for the environment. If the technology can be improved, we can use less energy. It’s a worthwhile thing to do.”

“You can make [a surface] as reflective as possible. But can you go beyond that? The idea is that maybe you can go a little bit beyond that using persistent luminescence as another way to transfer energy out…. It is interesting,” Patrick E. Phelan, a mechanical engineer at Arizona State University, told Knowable Magazine

Light, not heat: Researchers at the Lawrence Berkeley Lab explored this theory by making cool colors even cooler. Essentially, luminescent materials release energy as light, instead of heat.

The team, led by Paul Berdahl, an environmental physicist now retired, experimented with a synthetic ruby, which is luminescent in the sunlight. They found that a surface formulated with the synthetic ruby was cooler in the sunlight compared to a material that was a similar color but didn’t have the ruby material.

“It’s better for the environment,” Berdahl told Knowable Magazine. “If the technology can be improved, we can use less energy.… It’s a worthwhile thing to do.”

But luminescent materials would have to cut the heat a lot more than a few degrees to compel people to repaint their rooftops — unless it had a dual purpose.

Self-powered light: In addition to cooling cities’ outdoor temperature by partially converting energy absorbed from the sun into light instead of heat, luminescent materials could also reduce energy consumption by lighting up city streets and sidewalks.

Some European towns have already implemented glow-in-the-dark bicycle lanes, and some researchers have looked at utilizing luminescent paint for road markers. Glowing buildings could even reduce the need for streetlights, reports Knowable Magazine.

Outdoor lighting consumes a lot of energy — 1.3 quadrillions Btu in the U.S., according to the Department of Energy — so low-energy alternatives like glowing paint could make a difference in some circumstances.

Her lab created a glow-in-the-dark paint and modeled what might happen if they used it to paint a public route near a train station. They discovered that the paint would cut the amount of energy required for lights in the nearby region by roughly 27% by illuminating the road throughout the night.

But before our cities can transform into glowing energy-efficient environments, there are still challenges to overcome — like maintaining the glow through long, dark winter months or understanding the impact specific wavelengths could have on wildlife. 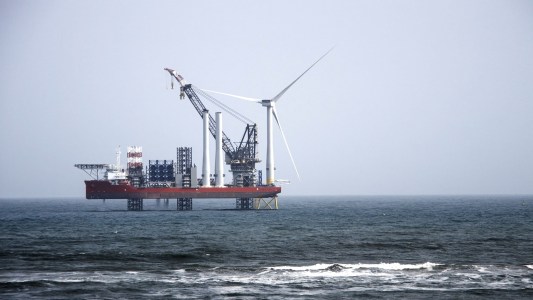 The most powerful winds can be found over the deep, open ocean. Floating wind turbines could tap into this and 100x our wind energy.

Clean Energy
There’s a ton of wind power in the deep sea. Let’s go get it.
Subscribe to Freethink for more great stories
Subscription Center
Challenges
Video
Freethink
Subscribe
We focus on solutions: the smartest people, the biggest ideas, and the most ground breaking technology shaping our future.
Subscribe