After centuries of burning fossil fuels, carbon is piling up in the atmosphere. So much that just reducing emissions won’t be enough to reverse the trend. Many researchers say that we will need to suck carbon from the atmosphere if we’re going to slow or stop global warming.

Some of these proposals include planting trees to pull CO2 from the air. But a researcher from Arizona State University (ASU) proposes using mechanical “trees” to combat climate change by directly extracting CO2 from the atmosphere.

Planting the seed: Carbon capture technology has the potential to rapidly offset emissions or even reduce CO2 in the atmosphere, but it has its downsides — most notably, it’s not very efficient. Running the giant fans and machines is incredibly energy-intensive for just a little benefit.

Trees, on the other hand, tend to grow (and absorb carbon) slowly, but they power themselves with energy from the sun.

So Klaus Lackner, professor of engineering at ASU and director of the Center for Negative Carbon Emissions, plans to create a passive carbon capture machine in the form of futuristic “mechanical trees.”

“We stumbled into a material that attracts CO2 when it’s dry and releases it when wet. We realized we could expose that material to wind and it would load up with CO2,” Lackner told The Conversation.

Once the CO2 is trapped in the material, it can be moved to a container where the CO2 can be released, captured, and stored.

The futuristic mechanical trees look like giant stacks of vinyl records. Each disk is coated with the CO2-trapping material. As air blows through the structure, it loads up the disks with CO2. When they’re maxed out, the loaded disks sink into a barrel where steam is used to release the captured CO2, trapping it in the barrel.

“By using moisture, we can avoid about half the energy consumption [of direct air capture] and use renewable energy for the rest,” Lackner said.

Proceed with caution: Lackner says direct air capture is part of the solution but cautions that we shouldn’t get ahead of ourselves.

“DOE [the Department of Energy] is scaring me because they make it sound like the technology is already ready. After neglecting the technology for 30 years, we can’t just say there are companies who know how to do it and all we have to do is push it along,” he said, adding that the largest direct air capture company sells carbon offsets for $500 to $1,000 per ton. “That’s too expensive.”

But he also is optimistic. He says that it is possible to store away captured CO2 permanently and, like his mechanical trees proposal, that’s best achieved with passive storage methods. One example of a passive way to lock away carbon is a technique called “mineral weathering.” When CO2 reacts with calcium-rich minerals, it forms solid carbonates, in which we can store an unlimited amount of carbon indefinitely.

Mineral weathering is already moving ahead, with an experimental beach in the Caribbean using green sand to both capture and store carbon dioxide.

First growth: In July 2021, ASU announced that the Department of Energy had awarded Lackner $2.5 million to work on his CO2 capture mechanical trees.

He is planning three “carbon farms” that together could absorb 1,000 tons of CO2 each day. One mechanical tree farm is scheduled to be open later this year.

“We expect this project to be an important step for the commercialization of a technology that can be scaled to help balance the world’s carbon budget,” said Pól Ó Móráin, the CEO of Carbon Collect, the Dublin company commercializing the trees. 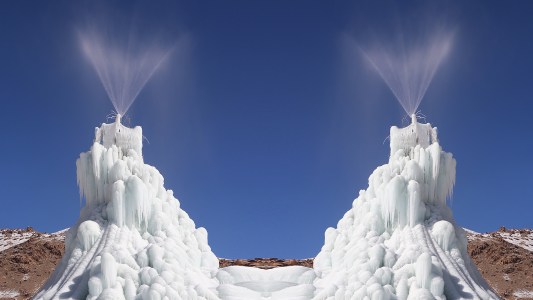 Chilean climate experts will attempt to DIY their own glaciers in 2022, in hopes of supplying fresh water through the dry summer months.

Climate Crisis
Chile is making its own glaciers
Subscribe to Freethink for more great stories
Subscription Center
Challenges
Video
Freethink
Subscribe
We focus on solutions: the smartest people, the biggest ideas, and the most ground breaking technology shaping our future.
Subscribe