Expanding solar-power generation is critical to lowering global greenhouse gas emissions. But, as the number of solar panels built increases, so does the concern for the mounting waste they will cause. The panels don’t last forever, and currently, there aren’t many economical options for solar panel recycling. But a French company is on it — they are attempting to recover the high-value materials in a used solar panel, making solar panel recycling a viable option.

The problem: There are plenty of reasons to switch to solar energy: it will reduce your energy bill. Solar energy doesn’t add more greenhouse gas into the atmosphere. (According to the Office of Energy Efficiency and Renewable Energy, the energy used in manufacturing the panel will be recovered after four years. This “energy payback” is pretty good, given that a panel can last ten times as long.)

And — let’s be honest — solar panels look pretty awesome on the roof of a house.

There is a hidden environmental cost: solar panel recycling is practically nil.

To put it simply, solar power is (mostly) a clean, free, and unlimited source of energy. But there is a hidden environmental cost: solar panel recycling is practically nil. Usually, at the end of the useful life of a solar panel, it is disposed of — tossing out all the materials that went into it.

According to the National Renewable Energy Laboratory (NREL), by 2050, solar panel trash in the United States may weigh as much as 30 Empire State Buildings, or 10 million metric tons.

A recent study by Julien Walzberg and NREL used modeling to look into the feasibility of solar panel recycling — who would do it, and is it possible?

“With today’s technology, PV modules are difficult to separate, and the process recovers mostly low-value materials,” Walzberg said in a statement. “Because of this, there currently isn’t enough revenue from recycling to offset the high costs, and therefore very little mass is recycled. Our model shows this could lead to a major waste problem by 2050.”

But, the good news is that there is a growing interest in recycling and reusing photovoltaic materials in solar panels.

The solution: ROSI, a French firm, is attempting to recover the high-value elements, particularly silver and silicon, to make recycling the panels more economically viable.

Currently, the glass, silicon, and other materials are ground into a mixture called cullet. It is used in building materials. But cullet isn’t worth much. And with the growing number of panels aging out, cullet might become even less valuable in the materials marketplace. It’s possible that extracting pure, precious elements may make solar panel recycling more viable.

ROSI Solar recently revealed plans to construct a new solar panel recycling facility in Grenoble, France. ROSI CEO Yun Luo told MIT Technology Review that the company has created the technology to extract valuable materials from the panels — like silver and silicon. The plant is expected to open by the end of 2022. They are working with another company that will remove the aluminum frame and glass before passing the panel to ROSI to recycle the rest.

Lou said they could remove nearly all the silver in solid form and the silicon in pure enough condition to reuse in new panels without going into specifics.

But Meng Tao, an engineer at Arizona State University and founder of TG Companies, a solar-panel recycling startup, points out that the recycling marketplace is constantly changing. And, with silver being so valuable and limited, solar panel manufacturers are trying to build new panels with less silver. That could make recycling panels less compelling.

Recycling solar panels is still in the early stages, but if new technologies prove successful, we could start to see a circular economy for the green energy industry. 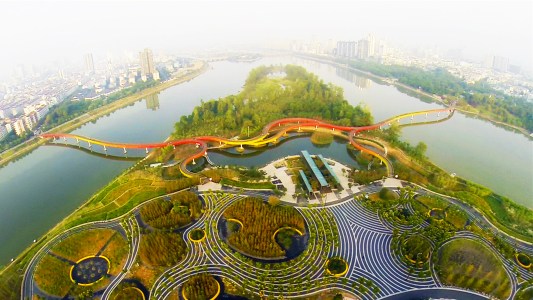 Deadly floods are expected to get worse over the next decade. One design solution for cities is to make them more porous — like a sponge.