Deadly floods have ravaged many cities around the world this year — and studies show that this trend is expected to continue over the next decade.

To make matters worse, this lethal trend is occurring right when the world is experiencing rapid urbanization.

A rising problem: Urban environments aren’t great at handling heavy rainfall because concrete and asphalt don’t soak up water. The water is forced to flow downhill into the drains, which can be overwhelmed in really bad storms.

Coastal cities are usually at the highest risk of flooding, due the additional risk of storm surges from the sea. But this year, many of the worst floods occurred in non-coastal cities — Tennessee in the U.S., Zhengzhou in central China, and central Germany. These cities were even less prepared for the rising waters.

What’s the culprit behind this deadly trend? Many scientists say warmer atmospheres (which cause clouds to hold more water) and a changing precipitation pattern are to blame.

“Simply because the air is now hotter and it can hold more moisture, as such it will give you more rain in intense storms than before,” Xuebin Zhang, a senior research scientist at Environment and Climate Change Canada told the Washington Post.

At the same time, more and more people are living in flood zones, along coasts, rivers, and floodplains. While building new infrastructure is expensive, being unprepared for a flood could prove to be even more costly for cities. In the next three decades, the cost of flood damage to homes in the U.S. is only projected to get higher — increasing 61% to $32 billion.

A porous solution: One design solution for cities is to become more porous — like a sponge.

“Sponge cities” have infrastructure that allows urban areas to collect water that can be used later during a drought, as well as the ability to absorb influxes during heavy rains and storms.

This infrastructure can be anything that absorbs water. Cities are trying everything from more “permeable pavement” for roads and building roofs made of plants and soil that (temporarily) absorb water. Other components of sponge cities include rain storage tunnels and wetlands. Even just planting more trees and shrubs can have a huge impact.

Some cities have initiated larger efforts. For example, Rotterdam has built dual-use public plazas — on a sunny day they may be playgrounds or skateparks, but once the rain comes down, the plazas are effectively designed to flood, collecting and storing rainwater.

All eyes on China: The term “sponge city” was popularized in China (in the U.S., we’d refer to many of these spongey design elements as “low-impact development”). China has been pretty bullish on the idea, and announced that by 2030 at least 30 cities will have spongy infrastructure that can soak up and reuse 70% of rainfall.

All of this at an estimated cost of $1 trillion USD.

Zhengzhou in central China, was touted as one of the country’s leading sponge cities. Since 2016, the city “has built more than 3,000 miles of new drainage, eliminated 125 flood-prone areas and created hundreds of acres of new green spaces” the NYT reports.

But then came the rain. In July, the city experienced an historic once-in-a-thousand-year flood and received the equivalent of eight months of rain in just three days.

Puzzle pieces: The $80 million that Zhengzhou has spent since 2016 to transform into a sponge city pales in comparison to the $10 billion in damages that the July floods caused. Many advocates of sponge cities say that as extreme weather is predicted to become more common, cities need to prepare for future floods by spending more money.

“When we say a city is a sponge city it doesn’t mean it is completely covered in the strategy already,”  Xu Yichun, associate director at Chapman Taylor, an architectural firm that has designed sponge city concepts across said. Basically: it’s a work in progress.

“When rainwater capture, green roofs, permeable paving, tree planting and enhanced water storage were all implemented across the catchment, the mean peak flood depth was reduced by up to 50%,” writes Forbes’ science contributor Laurie Winkless.

“With the exclusion of rainwater capture – which could remove all flooding in small pockets of the city – none of the interventions alone were effective against the floodwater.”

The upshot: Sponge cities alone probably won’t be the special sauce to guard our cities against flooding, especially the once-in-a-thousand-year floods.

But if incorporated in broader, systemic urban design efforts — like building surge barriers and seawalls to keep water out and restoring wetlands to prevent water inundation in urban areas — they can be a useful tool in the effort to build more resilient cities. 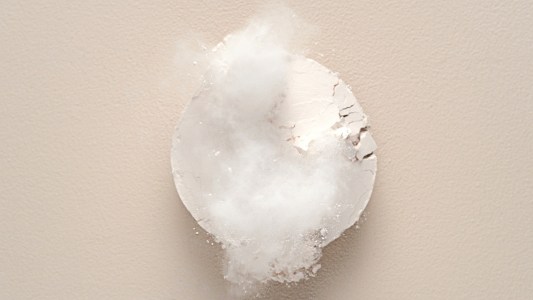 It’s less environmentally costly to produce milk proteins in the lab than to source them from cows, according to a new report.