Airbus has just flown the world’s biggest passenger plane with 100% sustainable aviation fuel powering one of its four engines — and the pilot couldn’t tell any difference. Future tests will switch over more engines to the 100% sustainable fuel.

Sustainable aviation fuel: Commercial aviation accounts for about 3% of global carbon emissions, and the U.N. predicts the industry’s emissions will more than triple by 2050, due to increased demand.

Some airlines are exploring the use of sustainable aviation fuel, which is made from renewable resources, such as algae, corn grain, or used cooking oil, instead of petroleum.

Commercial aviation’s carbon emissions are predicted to more than triple by 2050.

Compared to traditional jet fuel, this alternative fuel can produce 80% fewer emissions, according to the International Air Transport Association (IATA).

It can also be mixed with standard jet fuel and used in existing aircraft. That makes it more logistically feasible than hydrogen- or battery-powered planes, which require fundamentally different designs, engines, or fuel storage.

To reach that goal, it needs to prove that its planes will be able to fly just as well using only environmentally friendly fuel — and some in the industry worry that that might not be the case.

As Joshua Heyne, an associate professor of mechanical and aerospace engineering at the University of Dayton, told Popular Science, 100% sustainable aviation fuel might interact poorly with engine materials, causing leaks, or it might cause issues with the gauges used to measure fuel levels.

What’s new? On March 25, Airbus flew one of its A380 superjumbo jets for three hours with 100% sustainable aviation fuel powering one of its four engines. On March 29, it tested the alternative fuel during takeoff and landing.

“We didn’t notice any difference from a pilot point of view,” said Wolfgang Absmeier, the plane’s test pilot. “The engineers in the back, they were looking, of course, at 1,000 parameters, and at the first glance, there was no difference at all.”

French energy company TotalEnergies provided the fuel, which was made primarily from used cooking oil and other waste fats. Airbus has flown two other planes using 100% sustainable aviation fuel, but neither was as big as the A380, which is the world’s largest passenger airliner.

The big picture: Transitioning to more sustainable aviation fuel might be the lowest-hanging fruit of green aviation, but it’s far from the only option being explored.

Other groups are designing more energy-efficient fossil fuel-powered planes, as well as planes powered by hydrogen and electricity. The industry is also looking for ways to make flying more environmentally friendly by changing flight routes and altitudes.

“We didn’t notice any difference from a pilot point of view.”

If the aviation industry is able to go green over the long run, it’ll likely be due to some combination of all these approaches.

“I don’t think there will be single giant leaps [to sustainability],” Tony Douglas, CEO of Etihad Aviation Group, told the audience at the 2020 FIA Connect conference. “It’s going to be about how we use every opportunity to get better.” 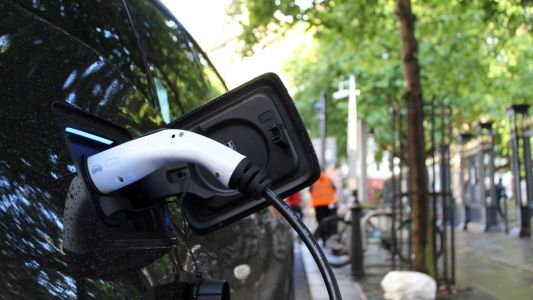 Want to help protect the environment, save money on gasoline, or try out the latest technology? Try powering your house with your car.

Cars
Can my electric car power my house? Not yet for most drivers, but vehicle-to-home charging is coming
Subscribe to Freethink for more great stories
Subscription Center
Challenges
Video
Freethink
Subscribe
We focus on solutions: the smartest people, the biggest ideas, and the most ground breaking technology shaping our future.
Subscribe